Reflecting on lessons learned in Davenport’s classroom 80 years ago

A foundation for life

When 102-year-old Mildred Laham was asked what her secret to living a long and happy life is, she didn’t hesitate to respond. “Living a good life and doing something good each day to help humanity,” she said. This sentiment was instilled upon Laham when she attended Davenport more than 80 years ago. The President at that time, M.E. Davenport, was known for encouraging students to “make a living, make a life — and make a contribution.”

This past December, Dr. Amy Mansfield, Davenport’s dean of the Donald W. Maine College of Business and the College of Technology, presented Mildred (Mitchell) Laham with an honorary associate’s of business administration in accounting degree. Laham’s son and daughter were in attendance to witness the recognition of their mother, who attended Davenport from 1939 to 1941.

Laham has always considered education a priority. During the war, women were not only earning degrees but were also making a major contribution to their family’s household income by joining the workforce. Although Laham wasn’t able to finish her degree at Davenport, to this day she credits the university as the driving force for helping her start her career.

Laham, the youngest of four daughters, attended grade school in a one-room schoolhouse. Her home was five miles outside of the small community of Tustin, Michigan. “We’d walk one mile each way to the schoolhouse and later had to share rides into Tustin to attend high school,” recalled Laham. She graduated in 1937 along with 25 classmates.

In 1939 Laham began her education at the Davenport-McLachlan Institute, known today as Davenport University. She enrolled in a 48-week stenographic program, a pre-secretarial program designed to prepare graduates for stenographic or clerical work.

Laham finished her stenographic program and then enrolled in accounting. “This was the coursework I was really interested in. They taught us how to write checks and keep accounting books along with many other business practices,” stated Laham. Mathematics has always been her true passion.

Laham began working at Rapid Standard Company early in its inception, around 1941, in order to help her sister’s family, with whom she was living while attending school. The company was producing conveyor systems, which were heavily used in military production at the start of World War II. Laham was the only administrative employee at the company, and she was in charge of writing letters, bookkeeping, and other administrative tasks. “I did what the boss asked me to. There was a lot of clerical work at the time, but we quickly grew as a company,” said Laham. And grow they did. By 1945, they had over 150 employees. As the company grew, so did Laham’s responsibilities. She soon added many responsibilities to her role.

Little did she know that her job would lead her to meet her future husband. George, who was the brother of one of Laham’s co-workers, was away serving as a soldier in WWII. That didn’t stop his sister from connecting him with Laham. The wartime sweethearts were married in 1948. 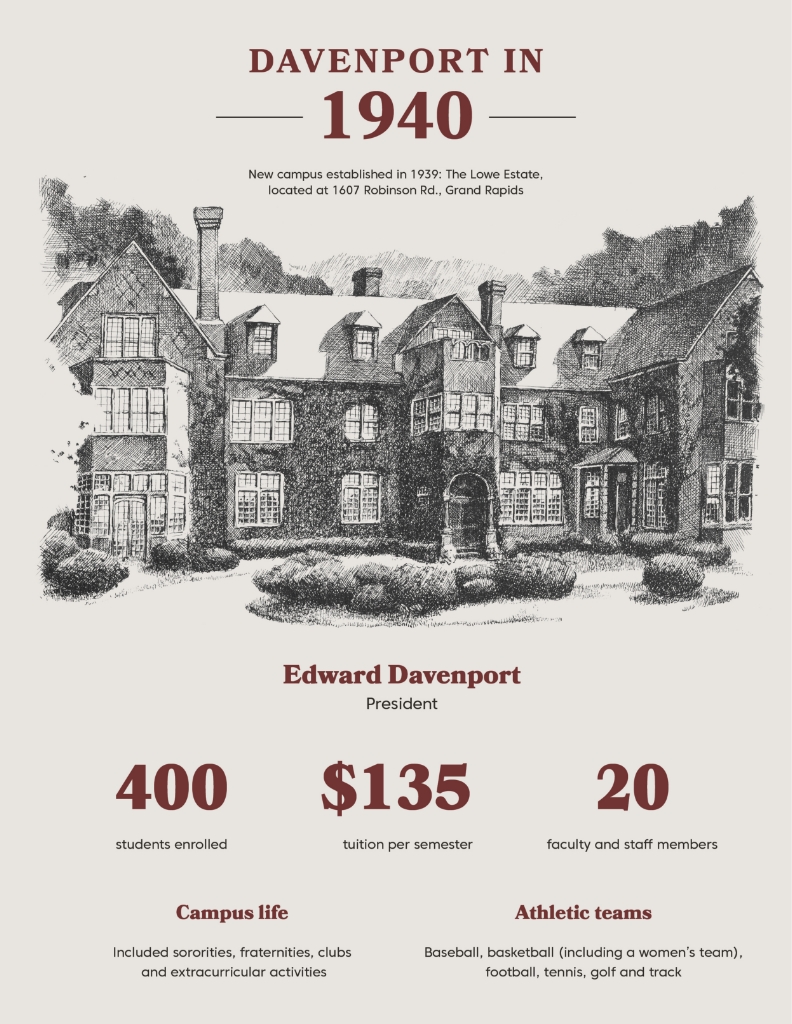 Making a life, making a contribution

Laham quickly turned her focus to starting a family and decided not to complete her degree. She and George spent 32 years happily married, until his passing in 1979. Together the two raised their daughter, Sandra, and two sons, Salim and Stephen. Today, Laham has two grandchildren, Nicholas and Zachary, that she gets to share her legacy with.

Even though she was busy at home, Laham always made time to prioritize volunteering. In her own way, this was how she continued to utilize many of the skills she learned through her courses at Davenport. Throughout her life, Laham has regularly volunteered at her local church as well as at St. Mary’s Hospital. “The church was always asking me to help with the accounting and to count the money. We’d host bingo weekly, and it was also my job to count the funds and prepare for the next round,” said Laham. During her service with St. Mary’s, Laham was responsible for assisting with purchasing new baby clothes and coordinating their sale in the gift shop.

Looking back over the years, Laham reflects that the world today is a very different place than it was when she first took a course at Davenport over 80 years ago. One thing that hasn’t changed is that even after all these years, Davenport is still a memorable part of Laham’s story