For Aniesha Loupe, choosing to attend college was intimidating. It took courage.

As a first-generation student — a term for undergraduate students whose parents haven’t earned a bachelor’s degree — she didn’t have a lot of knowledge about what to expect from college.

“My biggest fear was how hard it would be to get acclimated to college life,” said Loupe, a senior from Lansing, Michigan, studying medical case management.

Throughout her time at Davenport, where she served as a pack leader for Panther Prowl and president of ASPIRE, a student organization for women of color, that initial feeling of intimidation has turned into one of fulfillment, as she’s about to be the first in her family to earn a college degree — an achievement that’s also made her parents extremely proud.

And as she plans to pursue a master’s degree in clinical mental health psychology before eventually opening her own private practice for therapy, it’s evident Loupe will only continue to find success throughout her journey.

Student success is at the core of Davenport’s mission to prepare students to achieve the highest levels of academic performance so that they can go on to excel and advance in their chosen career.

One of the greatest opportunities Davenport has to impact student success is to provide first-generation students, like Loupe, with tailored support and resources. Research shows more than half of first-generation students don’t graduate, in part because these individuals often face heightened barriers to academic success, including their background and socioeconomic status.

In 2018, the Davenport University Office of Institutional Research fielded a study that uncovered Davenport students were experiencing similar challenges. The research revealed first-generation students were consistently retaining (the return rate of a student from one year to another) at a lower rate than the overall student body — a statistic that’s especially concerning as Davenport’s first-generation population makes up 37% of the total student body, which is higher than the national average of 33%.

As a result, a team of Davenport faculty and staff created an initiative to ensure first-generation students have the resources and support they need to overcome the challenges specific to them, like lacking a sense of belonging and high levels of anxiety.

The team, which is led by the director of student transitions and academic readiness, Dr. Jodi Hicks, aims to help first-generation students graduate at the same rate as the rest of the student body. The university has set a goal to ensure at least 81% of its student population reaches graduation. The only way the university is going to see those high retention rates is if it can successfully support first-generation students.

To accomplish this goal, the team established several interventions, the first of which, the First-Generation Peer Mentor Program, was piloted in late 2019. Through the program, each student is paired with a peer mentor to help navigate their education. They’re also provided with additional resources to address the financial or emotional challenges unique to first-generation students. This pilot was funded by the M.E. Davenport Legacy Fund at Davenport University. An intra-grant fund created by a gift from the M.E. Davenport Foundation to encourage and support the most innovative and anticipatory ideas in learning, leadership and achievement.

Hicks launched the pilot program with 24 students, and the results were extremely promising: 91% of those 24 students returned the next academic year, compared to the 69% retention rate of first-generation students who chose not to participate in the program.

“The blessed success of that initial peer mentoring program ultimately led to the birth of the First-Generation Student Success Initiative,” Hicks said.

Through the initiative, Davenport provides support services to first-generation students, offers continuous training to staff and faculty so they understand and address students’ unique needs, offers additional scholarship support, and established a communication system for first-generation students and parents so that they understand the initiative’s services and opportunities.

In doing so, the First-Generation Student Success Initiative will help eliminate the equity gap that exists for first-generation students.

“Davenport is uniquely gifted, with over 60% of our faculty and staff being first-gen themselves, to help meet the vast needs of our first-gen students,” Hicks said. “Ultimately, this initiative will help our first-generation students retain and graduate at the same rate as our other students.”

The First-Generation Student Success Initiative’s current efforts include growing the peer mentoring program, which has expanded to all campuses and currently involves more than 70 students.

One of those peer mentors is Loupe, who started mentoring in 2020.

“My favorite part is seeing them become less stressed out because they have extra support to gain university resources, as well as hearing about their growth as a student,” Loupe said. “I want first-generation students to know that they can use all of the resources that are available to them, that they don’t have to go through college alone and that building a community will be one of the most important factors of their experience.”

Moving forward, Hicks said the initiative has a number of goals it hopes to achieve, such as designating First-Gen Champions in all academic departments, developing student workshops geared toward things like study skills and financial aid, and recognizing first-generation graduates.

As the initiative grows and first-generation students continue to see increased support, Davenport’s efforts will have far-reaching effects.

“The beauty of this program is that we are not only supporting and celebrating first-generation students currently enrolled with us, but we also recognize the life-changing impact their success may ultimately have on their family and friends,” Hicks said. 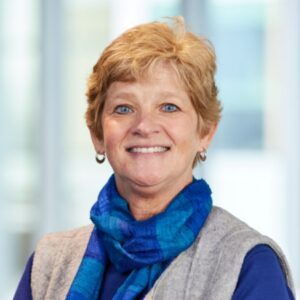 Dr. Jodi Hicks has served Davenport University in many capacities over the years, including as assistant director of academic services; director of first-year experience; and, currently, director of student transitions and academic readiness. She also helps lead the university’s recently launched First-Generation Student Success Initiative. Hicks is chair of the athletic advisory board at Davenport and lead adviser for the Alpha Lambda Delta Honor Society.

As a faculty member, Hicks teaches achieving career and education success and sports psychology courses. She also leads a student success presentation at all new student orientations. She is passionate about encouraging and supporting students to reach their educational and personal goals.

Hicks holds a master’s degree in counseling psychology from Western Michigan University and a doctorate in human services/counseling studies from Capella University. Her doctoral research focused on mentoring college students.