How one student’s journey defies the tradition in higher education

While many retired professionals are basking in the Florida sun chipping golf balls, 71-year-old Steve Wessell was in his native Michigan completing a master’s degree at Davenport University.

A career banker, Wessell worked at 1st Source Bank in South Bend, Indiana, where he spent the last eight years of his 22-year career as the bank’s executive vice president. Upon retiring, he returned home to Grand Rapids, Michigan, when the longing for something more than recreation set in.

“All of a sudden you’re just another old guy at the shuffleboard court,” he said. “You’ve lost your purpose if you know what I mean. And so I decided I’d go back and get an MBA.”

He admits it’s something he should have done decades ago, but as he said,

“I just never either had the time or took the time to do it, so I decided that could be my first retirement project.”

The average age of a graduate student is 31 years old. Wessell was slightly more experienced when he embarked on his graduate education at the age of 68. At Davenport, you can earn an online MBA or take the program in person.

“I wanted the interaction with people, and I thought, “What could be better than to be doing it in a classroom,” he recalled. Apart from being driven online by the pandemic, he took all of his classes in person to fully capitalize on the opportunity for interactions with fellow students and Davenport’s professors.

If you ask Wessell about his experience, he’ll tell you it’s nothing out of the ordinary. “I think the ones that are remarkable are the students who are working a full-time job and raising a family while trying to go to school,” he said.

Davenport’s small class sizes — some as few as five students and most about 12 students — made it easy for Wessell to get involved without feeling overwhelmed. “I think that is one of the strengths of the program,” he said. “The instructor knows who you are, and you get an opportunity to exchange ideas with other students more than you would in a larger class.”

Davenport has always incorporated real-world experience and expertise in its instruction. Nearly 61% of credits last fall were taught by adjuncts. Instructors at Davenport offer graduate students a decided advantage, Wessell observed. It can be boiled down to even the distribution of theory and application.

“There’s a good mix of instructors that are adjuncts — they have real-life experiences in the business world and bring that to the classroom,” he said, “and there are others with an academic background who are full-time faculty, and they bring something different, a bit more theoretical emphasis on the classes. It’s a great and important balance between the two.”

“I worked in the business world for 49 years. I learned a lot in the program that I could have used in my actual career had I done it earlier” – Steve Wessell, MBA ’20

As a professional with real-world experience, Wessell noticed how Davenport’s academic balance added value to his peers, who were holding down full-time jobs and careers while pursuing their graduate degrees.

“I worked in the business world for 49 years. I learned a lot in the program that I could have used in my actual career had I done it earlier,” he said. “I think most of the people [in the program] can use that kind of mentorship that these instructors who have business experience bring to the table.”

“It’s a beautiful campus. The facilities are nice. The people are great, and there’s a tremendous support. The advisors help you get classes set up. The university is convenient for people with great parking and a safe environment. I’m very impressed,” said Wessell.

In the end, it goes to show that no matter your age or station in life, you can pursue a graduate education at Davenport University. In 2020, Wessell, together with 507 of his fellow master’s degree graduates, became part of the 68,000 alums who have joined the ranks of the Davenport Alumni Association.

“When I started thinking about going back to school, I remember asking myself, Am I too old?” said Wessell. “Then I remembered that President Jimmy Carter’s mother, Lillian Carter, joined the Peace Corps at age 68 and traveled to India to work as a nurse. I figured I can go to class a night or two a week as a way to find purpose in my retirement. Mrs. Carter’s service was remarkable, my efforts were not. What an inspiration her story has been to me!” 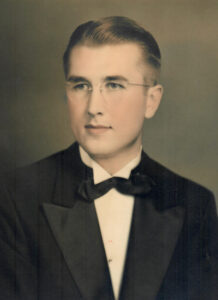 When Steve Wessell completed his graduate degree in 2020, he couldn’t help but remember his father, Tyrus Wessell, and the legacy he left behind at Davenport University — and how he had followed in his father’s footsteps.

“I wish he had been here to see that I did it and that I was as committed as he was to becoming a lifetime learner,” said Steve. “But he is, without doubt, the biggest influence in my life.”

The elder Wessell passed away in 2003, after spending nearly 70 years at Davenport University where he entered what was then Davenport-McLachlan Institute as a student in 1931.

After M.E. Davenport provided him a custodial job to pay for his tuition following his first year of school, Ty completed his education at Davenport, then continued his schooling elsewhere before returning to Davenport. Ty served as an instructor, vice president, and treasurer, bookstore manager, officer of Davenport Schools, board member of the Davenport Foundation, and advisor to the Davenport/Sneden family.

“He spent his whole life at Davenport. He was highly regarded,” said Steve. Serving on the M.E. Davenport Legacy Endowment Committee is perhaps how Steve pays homage to his father. The committee members allocate funding to staff /faculty who apply for support of their initiatives, programs, and projects that may fall outside of the university’s operating budget.

Along with having the campus bookstore named after him, Davenport’s most prestigious honor, the Tyrus R. Wessell Award annually recognizes an employee who reflects the character and commitment displayed by Wessell during his time as a teacher, mentor, and friend to the Davenport community.

“He was a man of immense character and one of the nicest people. He could have been successful in a lot of things, but he loved Davenport, and he loved what he did there,” said Steve.

“I remember asking him once later in life if he ever had any second thoughts if he was ever sorry that he spent his entire career there. And he simply answered, “Not for a single minute.”

Learn more about Davenport’s business degrees or the College of Business here.

Academics, Going to College,
Advancing Your Career, People of DU

One thought on “Education knows no boundaries”