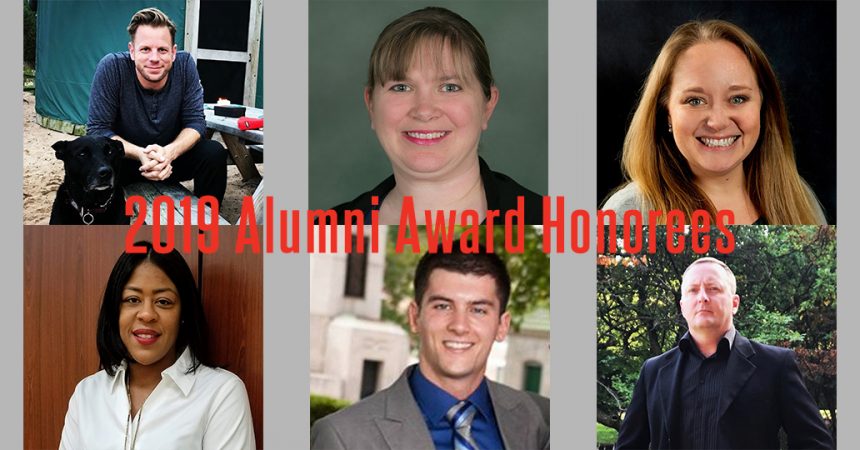 We are pleased to present our 2019 Alumni Award recipients. The following alumni have exemplified the vision and values of Davenport University through their professional and community service and were honored on Friday, September 27th at the Sneden Center on the Lettinga Campus.

An entrepreneur and educator at heart Mike’s outreach to the communities he serves is an extension of himself. Mike is a partner in MoTown Property Group, a residential and commercial redevelopment company who is part of the effort to improve neighborhoods and communities in Detroit. Mike also shares his experience as an entrepreneur by speaking at engagements around the state of Michigan. As an adjunct at Davenport, Mike’s students get real-life experiential learning while in his classroom, and as an alum, he recognizes the importance of giving with gratitude. Through his company, NaZdrowie Ltd., Mike created the Grand Rapids International Entrepreneurship Endowed Scholarship, which will be awarded to support students studying abroad with a preference for a business student focusing on entrepreneurship.

At the age of 14, Stephanie was living with her cousin and about to have a baby. Determined to provide more for her daughter, Stephanie graduated from high school, reconciled with her mother and enrolled for classes at Davenport. Her instructors saw more in her than the administrative assistant degree she was pursuing and encouraged her to enroll in accounting classes. A two-year degree turned into a bachelor’s degree and CPA certification.

Stephanie has worked for John Kasperek Co., Inc. for over 20 years and received a partnership in 2018. She also serves as the chair of the government report review committee in the Illinois CPA Society.

Valarie Handy is an Innovation Center Analyst for USDA Rural Development in Washington DC. She has held a number of different positions throughout her 15-year tenure with the agency that have included initiating, reviewing and processing funding applications associated with Single-Family Housing, Multi-Family Housing, Business & Industry and Community Programs. In her current role within the agency she is working with the Innovation Center’s Data Analytics Team to measure the value of existing partnerships and network building in rural communities.

Valarie recently launched Handy Enterprises, a property management company dedicated to providing affordable housing for residents in northern Michigan, and has been a frequent speaker and presenter for the Council of Development Finance Agencies (CDFA), the Community Economic Development Association of Michigan and the Michigan Economic Developer’s Association (MEDA). Valarie also holds multiple roles with numerous organizations in the local Traverse City area including Chair of the Garfield Township Parks & Recreation Commission and Chair of the FUSE Young Professionals program at the Traverse City Area Chamber of Commerce. She is an avid traveler and is truly dedicated to the future of rural communities.

Kenyatta’s life has always been focused on serving others, whether as a caregiver, an educator, or board member and volunteer. After many years working in various departments as a RN, Kenyatta moved into education. She creates and teaches training sessions for in-patient nurses on policy and procedure updates, processes that involve quality improvement strategies, equipment, EMR updates and standards or safe quality patient care.  She also facilitates new employee orientation for both RNs and NCAs. Her department had a fundamental role in Beaumont Health, Grosse Pointe’s Magnet designation, a recognition demonstrating Beaumont Health’s commitment in providing the very best nursing care.

Legette serves on a mental health task force for the Beaumont Healthy Community Coalition. She was also an integral part of forming the newly affiliated Detroit National Alliance of Mental Illness (NAMI) board, where she serves as secretary. Through her husband’s property management company, Kenyatta and he work with various organizations such as the Neighborhood Legal Service Organization to provide affordable housing to low-income and homeless individuals.

Many of the details about Drew’s job at the Naval Information Warfare Center Atlantic (NIWC Atlantic) are classified, but his general role is a computer scientist. He mainly works on projects relating to cryptographic research, machine learning, natural language processing, graph database implementation and Mission Operation Center (MOC) modeling, similar to his courses of study at Davenport University. Drew credits Davenport’s College of Technology faculty member Denny Bobeldyk’s mentorship in machine learning and biometrics for setting him apart from the crowd and helping lead to his acceptance in the Department of Defense Information Assurance Scholarship Program (IASP) as well as his current line of work.

While attending DU, Drew worked as a front desk assistant, a resident assistant, and played rugby. He has continued his education with a Master of Science in Computer Science from Southern Methodist University. He currently volunteers as a mentor for New Professionals and interns at NIWC Atlantic. In October Drew is moving to Stuttgart, Germany to lead an electronic systems security project for NIWC Atlantic.

Starting 31 years ago in an entry-level position of what eventually became Flexco Grand Rapids, Doug’s longtime career in the manufacturing business began. Doug credits family support, hard work, collaboration, and a great team for his success at Flexco. Mentors throughout his career have opened doors for Doug, and through his time at Flexco Doug has obtained multiple college degrees, many job advancement opportunities, and has traveled to 19 countries on 6 continents.

Doug and his wife co-founded Cosplay Crusaders and are part of larger costuming groups such as League of Enchantment, Costumers with a Cause, and Heroes Helping Heroes where Doug serves on the board. Through these organizations, their charity work benefits veterans, burn victims, and children’s hospitals.