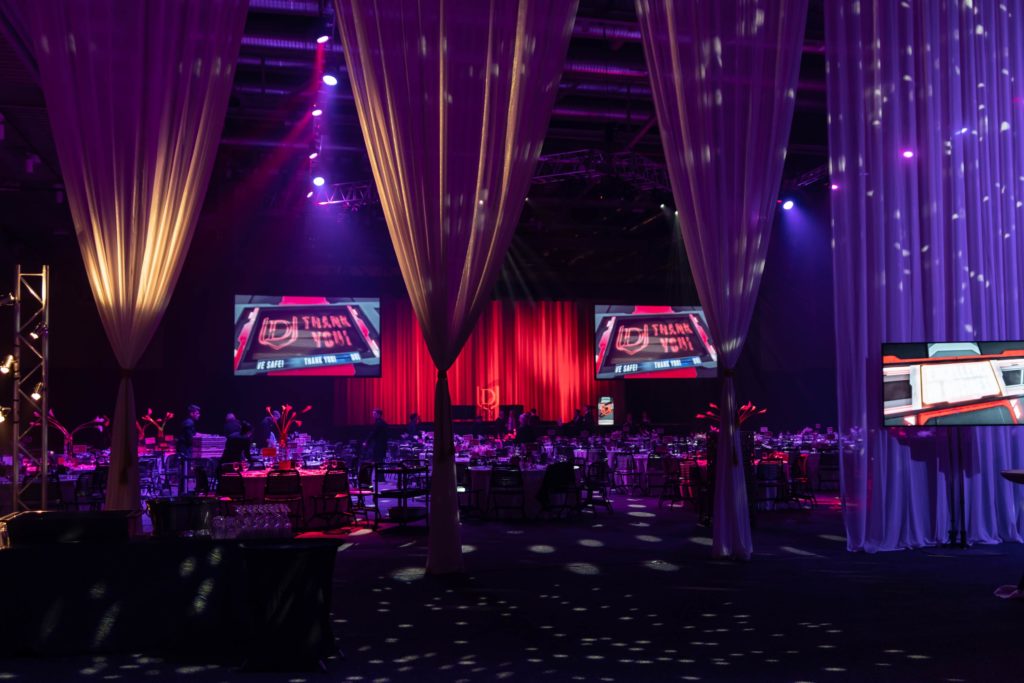 The Excellence in Business Dinner Gala is Davenport University’s largest annual fundraising event that directly benefits student scholarships. The event has raised more than $2.4 million in scholarships to help talented students earn their degrees and make a lasting difference in our workplaces and communities.

This year’s gala was held at DeVos Place in Grand Rapids on May 17. At the event, Mike VanGessel, chief executive officer of Rockford Construction, was honored with the 2019 Peter C. Cook Excellence in Business Award. The event also featured a discussion between Davenport University President Dr. Richard J. Pappas and former University of Michigan basketball coach and newest coach of the Cleveland Cavaliers, John Beilein.

Dr. Pappas kicked off the event.

“We’re here tonight for a few important reasons: To celebrate the business leadership and contributions of Mike VanGessel, to enjoy a conversation with our guest speaker John Beilein and, of course, to raise funds for scholarships, so we can help students at Davenport University ‘Get Where the World is Going’ in business, technology, health and urban education.”

The Peter C. Cook Excellence in Business Award is presented to an individual who exemplifies professional success and commitment to community service. This year, we recognized the 22nd recipient of the prestigious annual award.

“It is with great pride that we honor Mike VanGessel for his contributions to business and his service to the community,” said Pappas. “There are few that have contributed as greatly to the successful growth and development we’ve seen in West Michigan over the past 25 years.”

A Grand Rapids native with strong ties to the community, VanGessel is drawn to projects that positively impact the way people live, work, learn, heal and play. He has led the Rockford team since it began in 1987, through more than 4,500 projects, which include building Davenport University’s entire Grand Rapids campus.

In his acceptance speech, VanGessel said, “It isn’t just our company that has the passion for changing communities – a lot of people in this room have helped us along the way.”

“I had the opportunity to meet Peter Cook several times and he was an incredible man. I was blessed to see his humbleness, his kindness…he was a great cheerleader for what we were doing and I can’t say enough about how great it is to be receiving this award.”

VanGessel also recognized Donald Maine – the former Chancellor Emeritus for Davenport – for his role in connecting VanGessel to the university and for helping Rockford Construction grow into what it is today.

This year’s featured guest was John Beilein, the newest coach for the Cleveland Cavaliers and former University of Michigan men’s basketball head coach. Beilein is considered to be one of the best tactical basketball minds in the country. He is known for his integrity and continued innovation in college basketball during his four decades on the sidelines.

Dr. Pappas got to chat with Beilein in one of his first appearances after announcing his new position as the Cavaliers’ head coach. Here are a few highlights.

Pappas: What went into your decision to leave Michigan and go to the Cavaliers?

Beilein: I saw it as a very similar opportunity as when I chose to go to the greatest university in the world – the University of Michigan. To have one more opportunity to build something really special and to do it in the NBA with Dan Gilbert and his staff, and with a young team – for some reason, I felt that this was the one last thing I wanted to accomplish in coaching.

Pappas: You instill six values in your players – can you tell us about their origin? And will that change at all in the pros?

Beilein: No, it’s not going to change. All these years I’ve been a coach, we’ve had a lot of success in rebuilding programs and what happened was – we were over in Europe after our third year at Michigan. And, the first year, we weren’t very good. The second year, we made the NCAA tournament. The third year, we missed again. So we were going to Europe and my assistants said, ‘Coach, we’re a little nervous here because you don’t last long in the Big Ten if you don’t go to the NCAA tournament a lot. We know who you are but we have to teach our kids better.’ And I said, ‘We teach them every day.’ But they replied, ‘No, let’s really teach them; let’s get this organized.’ So we came up with the first five values: unity, passion, appreciation, integrity – by far the most important – and diligence. Then we added accountability in 2015 when we felt kids weren’t holding themselves or each other accountable. And since that date, we’ve been to 9/10 NCAA tournaments and four Big Ten championships…it was a game-changer for us. And it’s really important that we don’t forget that young kids today need to be taught these values.

Beilein spent 41 years as a collegiate head coach. He recorded 20-plus win seasons on 23 occasions and finished with a winning record in 35 seasons, placing him in the top 10 for career victories among active NCAA Division I head coaches. We’re excited to see what he’ll achieve in the NBA.

Thank you to our sponsors and supporters

The annual Excellence in Business Dinner Gala wouldn’t be possible without the support of our sponsors and the Davenport community.

“Every day, I meet a leader, an educator, a philanthropist in the Davenport ecosystem who is dedicated to transformational education,” said Rachel Render, executive vice president of alumni and development for the university. “I’d like to take this opportunity to thank all of you in the room who have also shown dedication to that transformation by giving to our scholarship fund tonight.”

Thank you to everyone who joined us to support student scholarships at the 2019 Excellence in Business Dinner Gala.