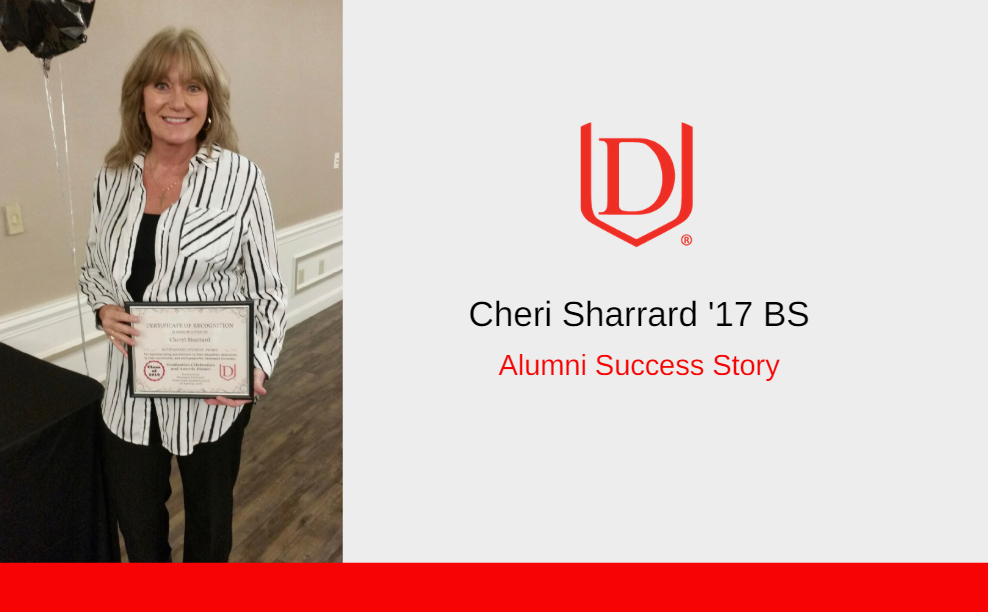 Cheri Sharrard ’17 has taken on many roles in her life; a manager, data processor, an office clerk, a postal worker, a machinist and a stay-at-home mom. A self-described lifelong learner, she found another opportunity to explore when she enrolled at Davenport to get her Networking Management and Securities degree.

Tell me about yourself.

I’ve been married for 32 years, have two sons in their twenties and a 2-year-old Labradoodle named Copper. Born and raised in Bay City, Michigan, my husband and I moved to Florida and lived there for 20 years. We raised our boys there until a few years before they started high school when we decided to move back to Michigan to be near family and aging parents.

I started my working career in Florida managing a pizza business. I’ve also been a purchaser, an accounts payable/receivable clerk and I’ve prepared financials for various companies.

When my children arrived, I became a stay at home mom while I kept the books and did office work in our family business. Once the boys were in school, I started working for the Post Office. I worked early mornings in various jobs within the postal office and was out before my kids were home. After the move to Michigan, I became a stay at home mom again and helped with my kids’ classrooms, field trips and youth groups.

Then, after working as a machinist at TRW/GM for seven years, the company closed their doors and left hundreds of people out of work. That was when I had the opportunity to go back to school and get my degree in Networking Management and Securities. I started at Davenport in the fall of 2014 and graduated in December of 2017 with my bachelor’s.

In a nutshell, what do you do?

In February of 2018, I started working for Davenport’s Great Lakes Bay campus as the networking lab assistant/testing center coordinator. I help students in networking classes with their hands-on labs/computer labs and with any other questions or help they need.

I enrolled in a couple more classes here at DU to get my network specialty in security as well as advanced Cisco networking. I am also studying to take the Certified Information Systems Security Professional (CISSP) exam.

The testing center at the Great Lakes Bay campus is a new addition. They always offered testing but it was done by admissions, advisors or the library staff. My new role has given them more time to focus on their jobs. I am working with instructors to send students to the testing center for any make-up tests, too. Last semester went extremely well and the testing center has become a valuable tool for everyone here. We added the College Level Examination Program (CLEP) and the DANTES Subject Standardized Tests (DSST) exams this year. In March, we will become an SAT testing site.

I feel like it is my pleasure to be working at DU and to be able to give back and make a difference here.

I chose DU because it offered smaller class sizes and hands-on networking classes. Also because the networking management and securities degree that DU offered gave me an understanding of all aspects of networking. I believe it also gives me an edge in the job market because of my diversity in the field.

DU gave me so much more than just a bachelor’s degree. Both of my sons graduated before me. I had been out of school for a very long time but I found DU students are a mix of every age group. I never felt that I didn’t belong. Working on group projects was pretty common and the diversity in our groups added new ways to look at things, which worked to our advantage.

What professors or staff did you connect with the most?

Terri Cardon-Weiss was the advisor for networking students. She helped me with my schedule each semester and kept me on track for graduating within my time frame. She was my go to person because she always had the answer to any question I had. Not only is she very good at her job, she is also a wonderful person.

Kris Howery, a networking instructor, taught me subnetting and had us practice different scenarios on the board until it became second nature. He shared his knowledge, kept us current in networking and was easy to talk to.

Dr. Lonnie Decker was my networking instructor. He shared sites showing current security breaches, where to find products and which sites featured the latest technology. He also informed us about different internships and available jobs in our field.

What was your favorite memory or thing you learned while attending DU?

Dr. Lonnie Decker and Cisco offered me an internship at the Little Caesar’s Arena. It was with the AmpThink Company who put in the HD WIFI network at Little Caesar’s. The network consisted of around 800 access points installed throughout the arena.

My job was to test the performance, capacity and coverage in a sold-out arena, so we could get accurate readings and make changes as needed. It was a great opportunity to put what I learned to work. Not only did I get in early and had all-access to the arena, but I was also getting paid to be at the first three Kid Rock concerts, Ed Sheeran, and the Pistons’ and Red Wings’ opening games. What a great opportunity!

What’s your dream job or next steps for your career?

My dream job would be to have my own business that offers repairs on hardware and software, installation and clean up and maintenance, along with setting up devices and configuring them for people. I’m not sure what my future holds; it could be a networking job, my own business or possibly working on my master’s degree. Right now, I’m preparing to take the CISSP exam in June.

Outside of work, what do you do for enjoyment?

I love summertime flowers, my vegetable garden and spending lots of time with friends and family. My husband and I like Florida and spend as much time as we can traveling back and forth.

My two sons are kind, always willing to help others, have faith and strong family values. They enjoy outdoor sports, working on home projects and tinkering with their cars. When they want to try something new, they learn about it and do it. They keep a positive attitude and are proud of me furthering my education. They inspire me to believe I can do anything.

What are your family values?

We have a solid Christian foundation with all of us growing up attending Christian schools, going to church regularly, participating in Christian groups and learning about God at a young age. Kindness goes a long way and we should treat people the way we want to be treated. We are a close family and value time spent together.

As a kind and helpful person. Someone who is hands-on, believes in herself and is willing to try new things.