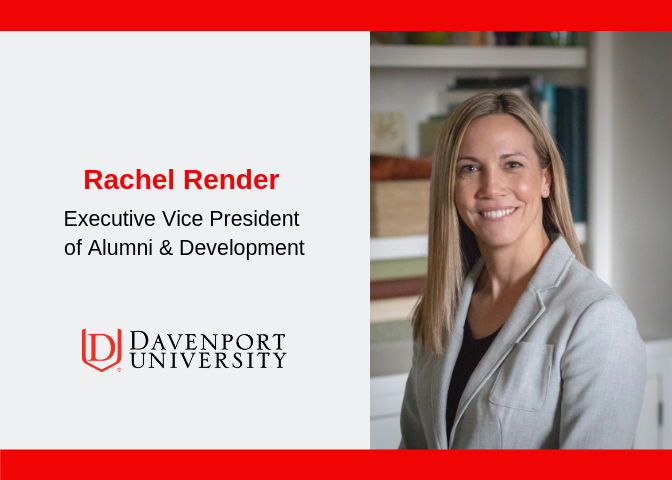 Davenport University announced on March 12, 2019 that it has named Rachel Render as its new executive vice president of alumni and development.

Render will begin the new role in April, bringing extensive leadership experience in institutional advancement to Davenport University. She most recently served as the senior director of development for the University of Colorado Boulder.

“Rachel is a dynamic and innovative leader who has a profound capacity for building relationships and supporting a university’s vision for growth,” said Dr. Richard J. Pappas, president of Davenport University. “She will be instrumental in helping Davenport University further its mission of transforming the lives of our students by preparing them for the world’s fastest growing careers.”

In her new role at Davenport University, Render will be responsible for driving meaningful engagement with alumni and increasing philanthropic support.

“I am incredibly impressed by the mission and vision of Davenport and I look forward to helping the university to continue to grow in its core mission of transforming communities and changing lives through higher education,” said Render.

Render is replacing Peg Luy, who retired in January after serving as the executive vice president of alumni and development for Davenport University for the last six years.

Render is a graduate of Central Michigan University with a degree in business administration.