Alum takes his career around the world 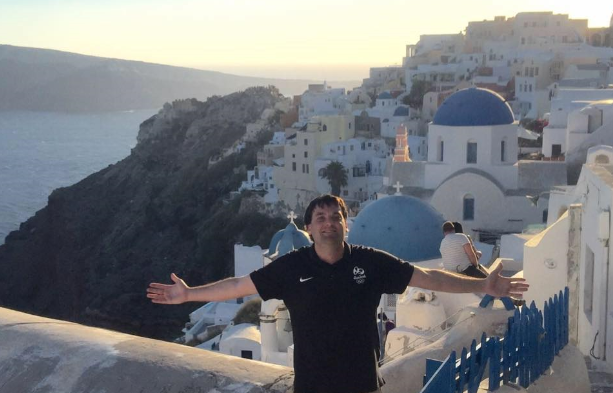 Brad Bultman ’07 received Davenport’s Young Alumni Award in 2013. Since that time, the last five years have been filled with adventure. He’s played with elephants in a Thailand jungle, ridden a camel around the Pyramids in Egypt, hiked the Great Wall of China, toured the Taj Mahal in India, and skydived in New Zealand, just to name a few.

Travel is the passion in your life. Tell us about some trips that stood out among all others.

I’ve been to 81 countries, all seven continents, and visited the seven wonders of the world. I now live in Sydney, Australia, but I’ve also lived in Japan, New Zealand, Greece, Cambodia and the U.S. When I moved away from the U.S., I felt it was risky. Today, I’m happier than ever and have achieved beyond my wildest dreams.

I lived in Cambodia for three months, volunteering at a non-profit school for children. I taught English, played sports with them and gave them moral support. They’re living in the poorest country in Asia. It was the best experience – the Cambodian people seemed to be the happiest people I’ve met.

I attended the 2010 Summer Olympics in Rio de Janeiro, Brazil. There is nothing more fun than the atmosphere at the Olympics. The camaraderie and passion from all over the world are incredible. The Brazilian community was so welcoming and Rio was beautiful.

I’ve only taken one cruise as I like to guide myself. The cruise was between the countries of Russia, Sweden, Finland and Estonia. The cruise ship was Russian owned, and the majority of workers and passengers only spoke Russian. The Russian people, despite the language barrier, were so kind.

Japan is my favorite country. The Japanese are the kindest people. The country is so unique, clean and safe. They are known for innovative, efficient processes. Their food is my favorite! I am proud to say that I’ve lived in Japan.

Tell us what has happened in your life since receiving Davenport’s Young Alumni Award five years ago.

Tell us why you chose DU and how DU influenced your decision on the path you’ve chosen?

I chose Davenport University when I graduated from Sparta High School (2003) because Davenport teaches business with excellence. I loved the flexibility of being able to take courses both in-person as well as online. The professors are experienced and approachable.

The Business Professionals of America (BPA) organization, advised by faculty Ron Draayer and Deb Kiss, gave me my first glimpse into the business world. I competed through BPA in the category of Entrepreneurship, taking first place in Michigan and competing at the National Leadership Conference in Anaheim, California in 2004. Davenport gave me opportunities and experiences that grew my resume, catapulting me into working for some tremendous companies.

What are some of the jobs you’ve held?

What is your dream job?

It would be a dream to be president of the United Nations. I would love to be in a better position to stop war, preach global peace and love, and be able to help those in need across the world.

There’s a major imbalance of wealth and living conditions worldwide. Some humans are born in amazing places with a support system around them while others are born in extremely poor, war-torn places with no support to help them reach their potential.

Talk about your family values.

Despite living the furthest time zone away from my family, I still manage to talk to my family and friends in the U.S. quite often via phone call, text message or social media.

I just married a woman along a beach in Australia. She’s a dual citizen of Australia and Ireland. We would like to continue traveling with our children someday to teach them about inequality and how to make the world a better place. We’re taking two honeymoons – one in Thailand/Vietnam and then a couple months later, we’re traveling through Uganda/Rwanda/Zimbabwe/Zambia/South Africa.

I would like to be remembered as someone who was obsessed with achieving dreams and was successful when taking risks. I’ve made sacrifices in my life. I am hopeful that I will inspire others through my journey.

If you would like to connect with Brad, send him an email at bbultman@gmail.com.