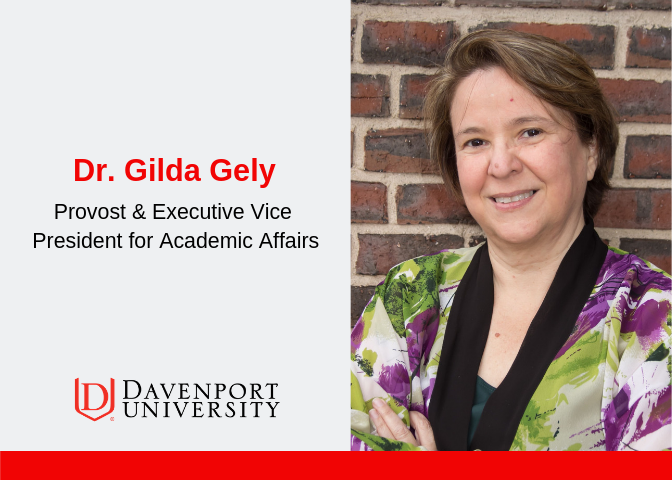 Dr. Gely will begin the new role in July, bringing nearly 30 years of leadership experience in higher education to DU. She most recently served as the provost and vice president for academic and student affairs for Cambridge College in Massachusetts.

“Dr. Gely is a proven leader in higher education,” said DU President Dr. Richard J. Pappas. “She will be instrumental in helping Davenport University further its mission of transforming the lives of our students by preparing them for the world’s fastest growing careers.”

This is a return home for Dr. Gely as she held leadership positions within a couple of well-respected colleges in our community including Aquinas and Grand Rapids Community College. In fact, she shared that she is thrilled to be returning to a city and state she feels is the most progressive and collaborative in responding to the needs of students.

Dr. Gely’s accomplishments include leading efforts for strategic planning, design and development of proposed and new academic degrees, and other academic initiatives. She also has a proven track record of advancing partnerships with other educational institutions including community colleges and public school systems.

Prior to joining Cambridge College, Dr. Gely served as executive vice president and provost at Aquinas College in Grand Rapids, Michigan and as provost and executive vice president at Grand Rapids Community College (GRCC). Additionally, Dr. Gely served as interim dean of academic affairs at the University of Puerto Rico, Humacao and has held positions as the vice chancellor and director of the languages department at the Universidad del Este, Carolina in Puerto Rico.

Dr. Gely has also held numerous leadership roles within the community including sitting on the board of the Grand Rapids Public Museum, Board of Art and Museum Commissioners for the City of Grand Rapids and the World Affairs Council. Her many accolades include being awarded the Distinguished Woman in Higher Education Leadership Award by the Michigan ACE Network in 2011.