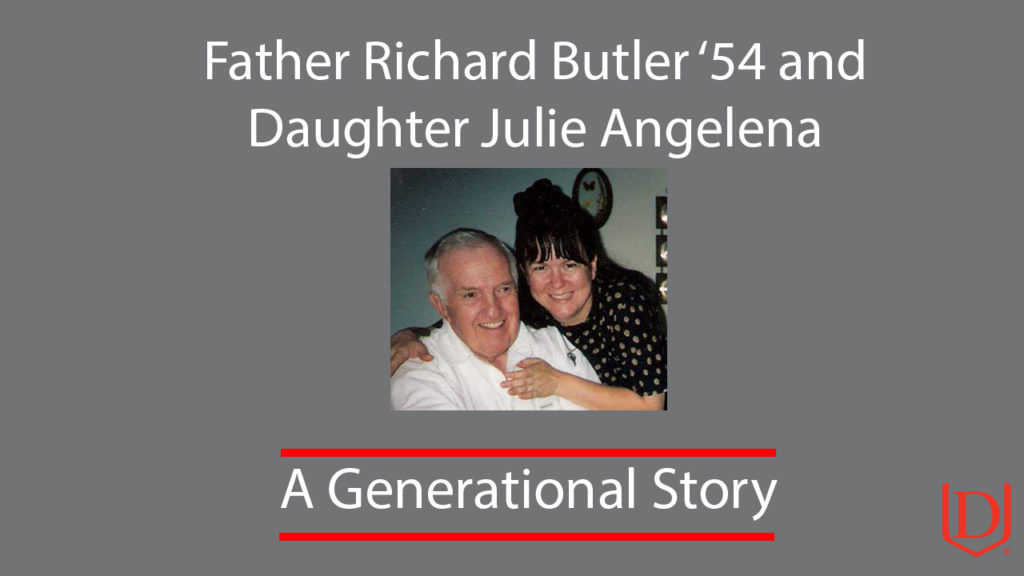 From college to university, the Butler family has created a tradition in attending Davenport

Davenport University legal studies student Julie Angelena never forgot what attending Davenport meant to her father. Now, she is living his legacy by walking in his footsteps and bringing optimism to the world through hard work and overcoming challenges.

Richard Butler, class of 1954, was an accounting student when Davenport College was located on Fulton Street in downtown Grand Rapids. Before attending Davenport, Butler worked alongside many of his brothers on an assembly line at General Motors.

“After many years on the line, my mother convinced my dad he was smart enough to get his degree,” Angelena said. “That encouragement meant the world to him.”

After earning his associate’s degree in accounting, Butler moved up the ladder and off the factory line. While working in GM’s offices, he made a positive impression and was trained to become a standards engineer. This was something Butler never dreamed was possible but thanks to his Davenport education and his family’s support, he enjoyed a satisfying career.

When Angelena graduated from high school, she was encouraged by her family to go to college. So she followed in her father’s footsteps and enrolled in the accounting and computer science programs at Davenport.

“My father and I both really enjoyed math,” she said.

In 1986, after getting married and having a baby, Angelena’s college career was cut short. During that time, she was working in an accounting and management position while raising a family and living life to its fullest, taking on whatever adventures came her way.

However, things changed when her father got sick. Angelena decided to move home to help take care of him and her mother. Unfortunately, she lost her father to ALS in 1998.

Angelena was determined not to let the loss of her father change how she felt about living a life filled with adventure. After 32 years, she decided to return to school and earn her degree in something she’s passionate about. Davenport was the obvious choice because of its sentimental value to her and her family. Angelena plans to obtain a legal studies degree in order to give back to the community that has given so much to her. She will graduate with the class of 2021.

“I want to make the world a better place and I want to educate our community about politics, so they can make a real difference,” Angelena said. “I want to make government relatable and accessible to everyone.”