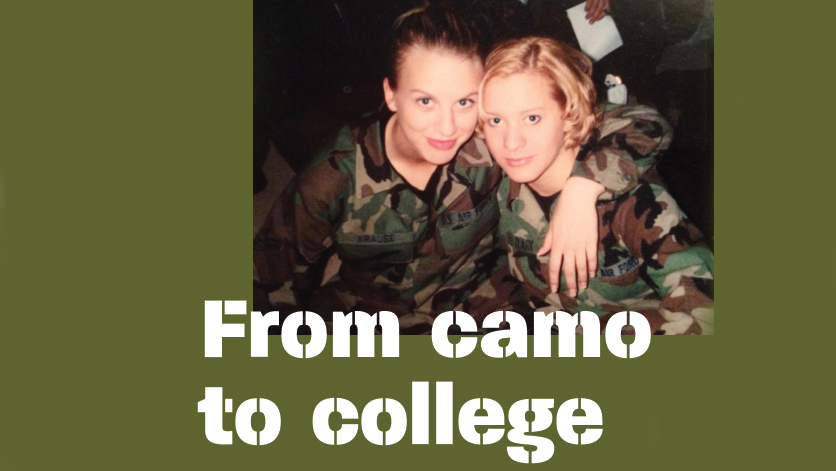 From camo to college

Trudy Schiller, ’18, left for basic training only days after the Twin Towers fell on Sept. 11, 2001. After serving in the Air Force for nearly five years as a medic, she wasn’t sure what was next.

For six years after leaving the military, she avoided going back to school. Then she learned of Davenport University’s Veterans to Bachelor of Science in Nursing pathway. The pathway is designed for service members with military medical experience, helping to fast-track their academic pursuits by granting advanced standing for transcripted military training or credit by exam in DU’s BSN-Pre Licensure program.

“For most medics who come out of the military, you’re a little leery of nursing school,” she said. “You don’t want to waste a year of college starting from scratch and learning the basics alongside students right out of high school.”

Finding the support needed to succeed

Last May, Schiller walked across the stage to receive her diploma after completing the Veterans to Bachelor of Science in Nursing pathway at DU’s Warren Campus.

“After everything that I went through in my three years at Davenport, commencement was overwhelming,” she said. “It was satisfying at the same time, especially having my whole family there. It was the end of a journey that I am so glad I did.”

Getting her degree was no easy feat.

“The summer before my sophomore year, I was diagnosed with brain cancer. I had to go through radiation and I didn’t know if I was going to make it through,” she said. “I couldn’t take a break. I did six weeks of radiation and the day after my last day I started my clinicals.”

Schiller says graduating is an accomplishment she couldn’t have done without her family — both at home and at Davenport.

“My professors were always checking in on me, asking if I needed accommodations or if I needed help or just wanted to sit and talk. It was very nice to know if I needed something, I had support,” she said.

Outside of the classroom, Schiller had the support of her husband, Jason, and the entire VBSN team.

“It is really helpful to have the dedicated VBSN team at the school. They are people who understand what we are going through because most of them are also veterans,” she said. “It was nice having people to let us know about the resources available because we tend not to ask for help.”

While Schiller had worked with patients for several years as a medic, she still found the human patient simulators a valuable experience.

“The scenarios they put forth are pretty accurate,” she said. “You can make your mistakes in the simulation lab and you will never forget them. When you get to clinicals, inevitably a similar situation will come up and you will know how to handle it because you did it in the lab.”

VBSN students also enroll in a transitions course. Schiller said her class’ faculty member, Rebecca Ventura, made an indelible impact on her experience as a student.

Schiller began her nursing career after graduation in Novi, Michigan, working in a clinical decision unit. She hopes to work in emergency medicine in the future.

Davenport was the first university in Michigan and one of nine initial institutions nationally to receive the VBSN HRSA grant — a five-year initiative funded at over $1.5 million.*

*This project is supported by the Health Resources and Services Administration (HRSA) of the U.S. Department of Health and Human Services (HHS) under grant number UF1HP26488 and title “Veterans to BSN Program” for $1,527,068, with 0% financed with nongovernmental sources. This information or content and conclusions are those of the author and should not be construed as the official position or policy of, nor should any endorsements be inferred by HRSA, HHS or the U.S. Government. This grant is for programmatic funding and excludes student tuition and fees.