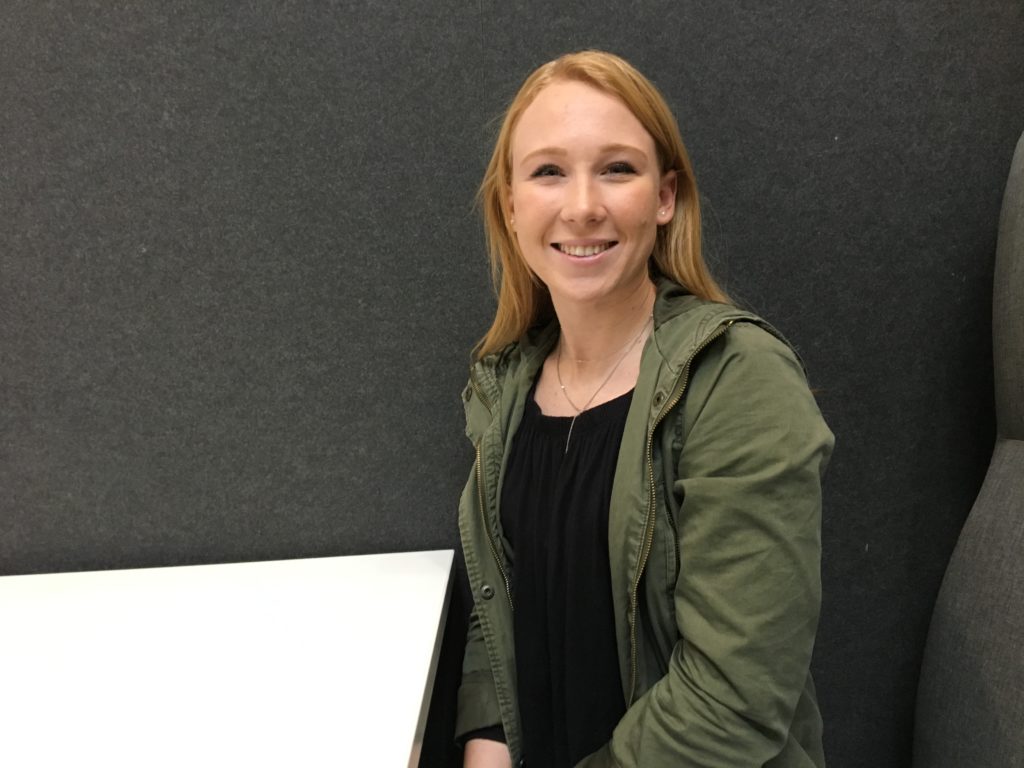 Five years ago, Brianna Losey was a high school student in San Diego. A teacher showed the class three circles depicting life choices they’d soon be making: Go to college and then find a job, look for a job now and not go on to school, or join the military and go to school with a good chance of graduating debt-free.

“I didn’t really have a plan at the time, but that teacher got the ball rolling for me,” she recalls. Another inspiration was her grandfather, a Marine. “We were very close. I took care of him when he passed away. That was what really made me decide that the military was what I wanted to do with my life.” She enlisted in the Army Reserves as a combat medic and started basic training the summer after her high school graduation.

Today Losey is a junior in Davenport’s Veterans Bachelor of Science in Nursing (VBSN) pathway. Supported by the Health Resources and Services Administration (HRSA) of the U.S. Department of Health and Human Service, VBSN exists to help people like Losey fast-track to a nursing degree by gaining academic credits for work done in the military. Unlike other Davenport VBSN students, however, Losey is also concurrently studying military science in the Reserve Officer Training Corps (ROTC) program at Western Michigan University’s satellite campus in Grand Rapids, which means she’ll commission as an officer when she graduates.

Davenport has affiliation with ROTC programs at Western and several other universities in Michigan that enable this type of dual enrollment. It takes exceptional stamina and self-discipline to be enrolled in two programs plus meet the ongoing training requirements of the Army Reserves (one weekend per month, two weekends per summer). But Losey has strong personal determination to keep her going – along with “coffee, lots of coffee,” she says.

“I decided to do this for a purpose. That really drives me to complete it,” she explains. “My passion in nursing to help people naturally goes hand-in-hand with being in the military, where one of our values is selfless service. That speaks to me. It’s a lot easier when you can say that what you’re doing isn’t a job, it’s a passion.”

So instead of slowing the pace during summer break, she participated in a month-long ROTC program in Latvia, working in orphanages and at local parks in addition to participating in a military-to-military interaction involving NATO forces from several countries. She describes it as “an incredible experience.”

“I’m putting in the hard work now,” she acknowledges, “but I’m really setting myself up for success later on by eliminating stressors that I won’t have to worry about when I graduate. I’ll have a guaranteed job in the Army and I’ll be a nurse too, which means I can work as an RN on the civilian side and practice in the military, too. It’s definitely worth the effort.”

Losey values the support she’s receiving at Davenport. For example, the VBSN pathway includes a first-year transitions class. It helps smooth the shift to nursing in a civilian context and also generates instant community with cohorts. “Connecting to other people who also have prior service or are currently in the military is like seeing a familiar face. It gives you an automatic friend to go to if you need it,” says Losey.

Currently, there are about 500 military students at Davenport, with 28 of them in the VBSN pathway. Dana Hill, VBSN advisor, points out that serving veterans is an integral part of Davenport’s legacy. “Davenport was founded by a Civil War veteran who wanted to help others returning from war complete an education. That history makes us very military friendly today.”

In addition to tuition discounts and programs that provide credit for military experience, military students can count on support from staff members like Hill who have also served. As result, she says, “you’re interacting with someone who understands the background of where you’re coming from  – and where you’re going.”

Losey’s advice for anyone considering a dual enrollment path like hers? “Just try it. There’s nothing you can lose. There are only things you’ll experience. If it’s not for you, that’s okay — the military definitely isn’t for everybody. But if you’re interested in doing it, this is a program that offers endless opportunities.”

“This project is supported by the Health Resources and Services Administration (HRSA) of the U.S. Department of Health and Human Services (HHS) under grant number UH1HP26488 and title “Veterans to BSN Program” for $1,527,068, with 0% financed with nongovernmental sources. This information or content and conclusions are those of the author and should not be construed as the official position or policy of, nor should any endorsements be inferred by HRSA, HHS or the U.S. Government.”