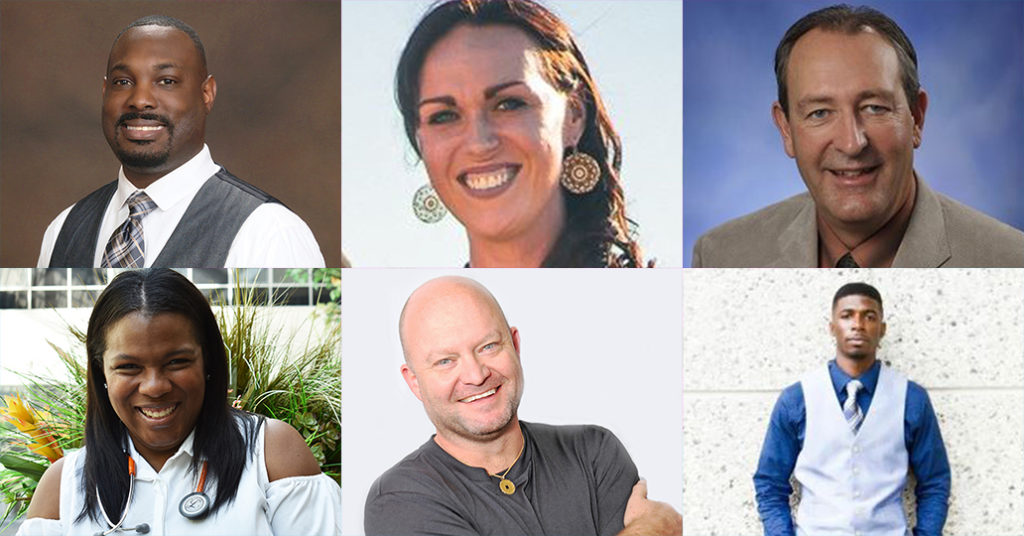 We are pleased to present our 2018 Alumni Award recipients. The following alumni have exemplified the vision and values of Davenport University through their professional and community service and were honored on Friday, September 28th at the Sneden Center on the Lettinga Campus.

Roger owns Victory Farms, LLC, a year-round specialty crop producer, as well as Victory Sales, LLC, a national produce distributor. He is currently an executive board member of the Michigan Vegetable Council, Vice President of the Vriesland Growers Cooperative and serves on the National Council of Agricultural Employees.

At the age of nineteen Derrick challenged himself to earn a college degree and reach higher for his family. After starting his collegiate career at Northwood University as a walk-on basketball player, Derrick transferred to Davenport University and started as a point guard for the Panthers – all while maintaining a scholarship, working full-time and raising his two children with his wife.

Derrick graduated with a Bachelor’s degree in Business Management and works at Creative Force as a Regional Event Director, where he manages regional event marketing teams supporting basketball events across the country.  Additionally, Derrick is an Assistant Men’s Basketball Coach at Grand Rapids Community College.

With experience in farming and a passion for wine, McKenzie used the MBA capstone class at Davenport University to design a business plan for a winery in northern Michigan.

McKenzie and her husband, Creighton, are fifth generation cherry farmers and wanted to create a business in agriculture where they could control the end product. Between their experience in farming and passion for wine, starting a winery seemed like a natural fit. In 2016, Rove Estate Vineyard & Winery opened its doors. Although there is no road map for entrepreneurship, finding passion in their business is what drives McKenzie and Creighton.

When McKenzie isn’t at the winery, she spends her time with her family of six, and dedicates much of her time building community and volunteering for Traverse City area non-profits.

Michelle found her purpose in nursing thanks to Davenport University. She graduated in the top of her class with honors in the spring of 2016, and earned a spot in the Beaumont Graduate Nursing Program as a gastrointestinal nurse. She now works as a nurse in the emergency department where she earned her trauma nursing core certification.

In 2017, Michelle was awarded the Beaumont Hospital DAISY Award for Extraordinary Nurses, an international recognition for outstanding nurses. She received this award because of her ability to lead and build trust with her patients in order to provide the best care.

Aaron does not take the generosity of others for granted. In 2017, he created a scholarship to help underserved populations attend Davenport University. The Aaron House Future Black Technologist Scholarship will be offered to an African American student from the Southeast Michigan area with a major in technology.

For Aaron, investing in a scholarship means more than helping students pay for their education – it opens up doors. Aaron, who grew up in Detroit and attended Detroit Public Schools, found joy in working on computers at an early age. In high school, he attended Golightly Career and Technical Center in the heart of Detroit. He spent half of his day focused on typical high school coursework and the other half, exploring applications of the Golightly computer repair program.

Currently, he is the President of ADAPTIVITY Development, L.L.C., a boutique business strategy and investment consultancy firm – focused on growing start-ups, established, family-owned, and franchise businesses. Jason is also the Chairperson of ARCpoint Labs of Charlotte and Rock Hill, and Owner/Head Brewmaster of Rock Hill Brewing Company in Rock Hill, SC.

Jason serves the community as a board member and past chair of the Rock Hill Area Council for the York County Chamber of Commerce, and is a member of the York County Economic Development Committee Board.