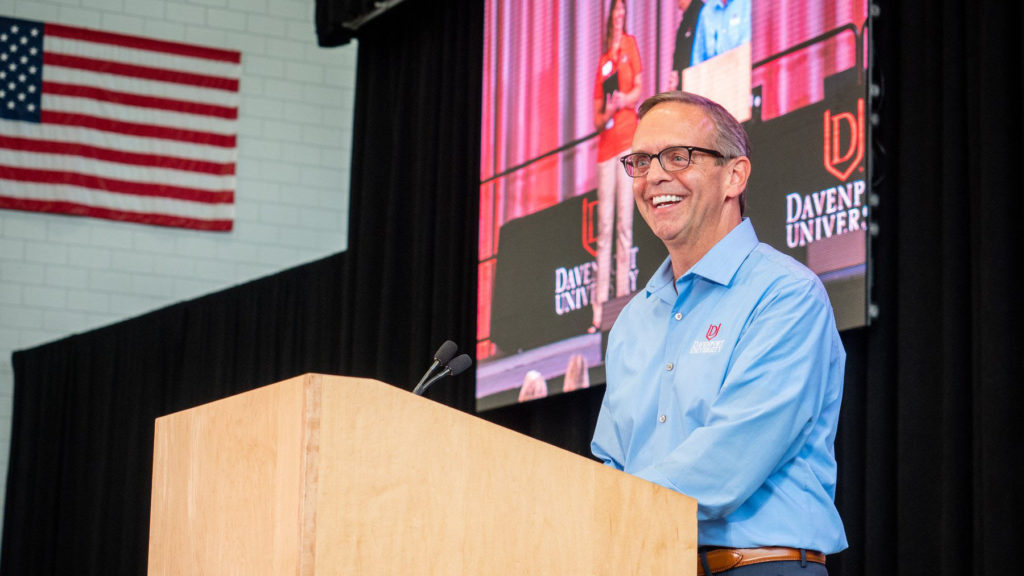 Faculty and staff gathered last week to celebrate their role in shaping the stories of Davenport University’s students at the annual DavenFest. View the photo gallery on Facebook.

Taking a role in DU’s story

DU Trustee Michelle Van Dyke spoke, sharing how each person in the DU community shares a part of the university’s story.

“We are all characters in this Davenport story — playing different roles — each as important as all the others,”  Van Dyke, president and CEO of Heart of West Michigan United Way. “We’ve got an intriguing plot: preparing and transforming students to achieve the highest levels of academic performance, leading them to excel and advance in their chosen fields. We are telling the story of a transformational journey.”

For the 40 percent of students who are the first in their families to attend college, Van Dyke says the impact is indelible.

“We are helping them write or rewrite their story and changing the trajectory of the stories of their families for generations,” she said.

For recent alumna Kuana School, DU changed her life. School began her career at a health and fitness center when she was 18. When the career suddenly ended, she lost her car and home. She needed to rebuild her life from scratch. After gaining employment as a certified nurse aide, School decided to inquire about a nursing degree at DU.

“Some friends warned me not to try, that they thought it was too much for me to take on. However, these doubts were dispelled by the fact that there were a lot of changes I wanted to see in the world, and I still had much to give,” she said. “I decided that if I could believe in myself enough, I could find a way to become a nurse by age 40.”

School says completing her degree gave her the opportunity to change her fate. During her time as a student, she conducted academic research, presented at conferences, co-authored a scientific paper and mentored other students.

“I intend to use both my nursing degree and laboratory research experience towards assisting underserved populations on a more global scale of integrative health. My degree from DU started my path there. This is only the beginning,” she said.

Brandi Melkild was given the 2018 DEI Champion Award. She was the mind behind the Panther Resource Closet.

Before its official opening in January 2018, the closet had already served 85 students with the distribution of 300 items of professional clothing and 200 food and hygiene items.

Recipients of the Excellence in Teaching Awards were Kelli Baumgartner, Scott Guminey and Laura Harris.

DU also recognized employees who are celebrating milestones of service.