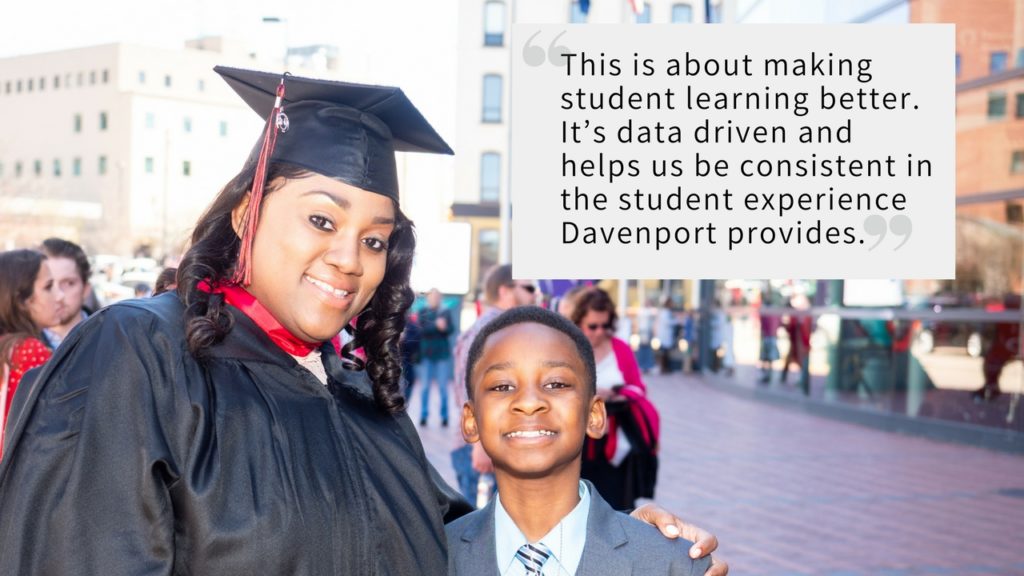 Employers across the nation often lament about college graduates and the soft skills they lack — such as critical thinking and problem solving, leadership and teamwork, and creativity and communication.

For the past five years, Davenport University’s Excellence System has proactively ensured each student graduates with both the soft and hard skills needed for career success.

The Excellence System — a data-driven method that integrates nine competency areas throughout the curriculum of each major — defines and assesses the skills demanded by employers.

“The Excellence System was formed in partnership with business and industry experts,” said Wayne Sneath, director of Experiential Learning. “Fundamentally, this is about making student learning better. It’s data driven and helps us be consistent in the student experience Davenport provides.”

Davenport is moving its Excellence System to a higher level by offering students the opportunity to gain certifications in each of the nine areas.

Last fall, marketing students could begin to opt in for Excellence System certification. Vice Provost Irene Bembenista said DU will offer certification as an option for additional programs in the future.

To date, 23 marketing students have opted in to certification and 13 certificates have been awarded.

“The Excellence System does not impact their grades for the course,” Sneath said. “There is a scale they need to meet, but there is no penalty if they don’t meet it. To earn a certification, an assignment is assessed by a four-member team. There has to be consensus on scoring between at least two of the faculty for the certification to be awarded.”

In addition to receiving a certificate, it also becomes a part of the students’ permanent academic record. In the future, it will become a part of their academic transcript.

Brick by brick: Building a system for student success

Academics began constructing the system in 2003 by seeking input from those directly impacted by DU graduates.

“We asked employers about the types of soft skills they sought to determine the needed competency areas,” Bembenista said. “We then solidified the definitions of each competency area by working with faculty across the disciplines, as well what was provided by the Association of American Colleges & Universities.”

“We had to look critically at what assignments actually measured the learning outcomes,” Sneath said. “It pushed people — in a good way — to think about where academics intersected with the competencies.”

The Excellence System is currently measured in 119 courses. The rubrics are used to evaluate assignments, assign scores according to a points scale and produce data.

This data, which has been collected annually since 2014, allows Davenport to revise curriculum and make improvements, Sneath said.