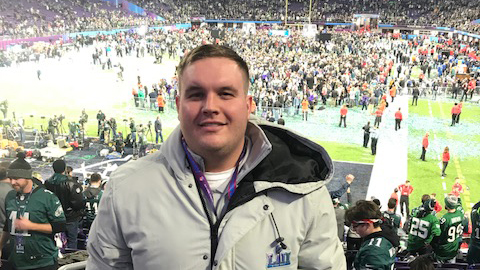 While millions of viewers watched the Super Bowl on Feb. 4, Ryan Coleman — a Davenport University alumnus — was given the opportunity to put his skills and knowledge to work at the event.

Coleman earned his bachelor’s degree in sport management from DU in 2016 and is currently working on his graduate degree at Minot State University in North Dakota.

“Being only eight hours from the stadium, another employee at MSU reached out to see if anyone was interested,” Coleman said. “I knew it wasn’t an opportunity that I could pass up.” 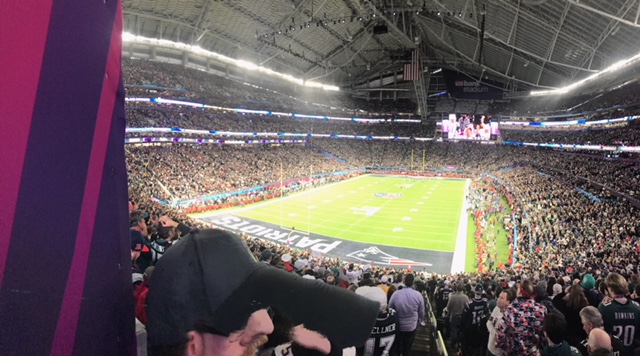 “It was a little overwhelming at first because I had never been to that stadium before and I was just thrown into it,” Coleman said. “My job was to support the fans and help give them the experience they wanted.”

During the game, Coleman was stationed by the NBC booth and had the opportunity to network.

“I was able to get a program I bought signed by NBC’s Tony Dungy and Rodney Harrison,” Coleman said. “I saw a lot of other celebrities throughout the day too like football player Larry Fitzgerald and NBC’s Dan Patrick.”

Building a career in sport management begins at DU

“I always had a passion for sports but never knew what I wanted to do after high school,” Coleman said. “A few years after high school, I met with a DU advisor and transferred into the Sports Management program.”

“Mr. Luy is a great man and someone I developed a relationship with,” Coleman said. “He was someone I always asked for advice and he helped me network to land a great internship.”

Coleman believes it is important for students to get to know professors because they provide guidance.

“Davenport provided hands-on experience and taught me the importance of networking,” Coleman said. “I was prepared for the real world and Davenport helped me get to where I am today.”