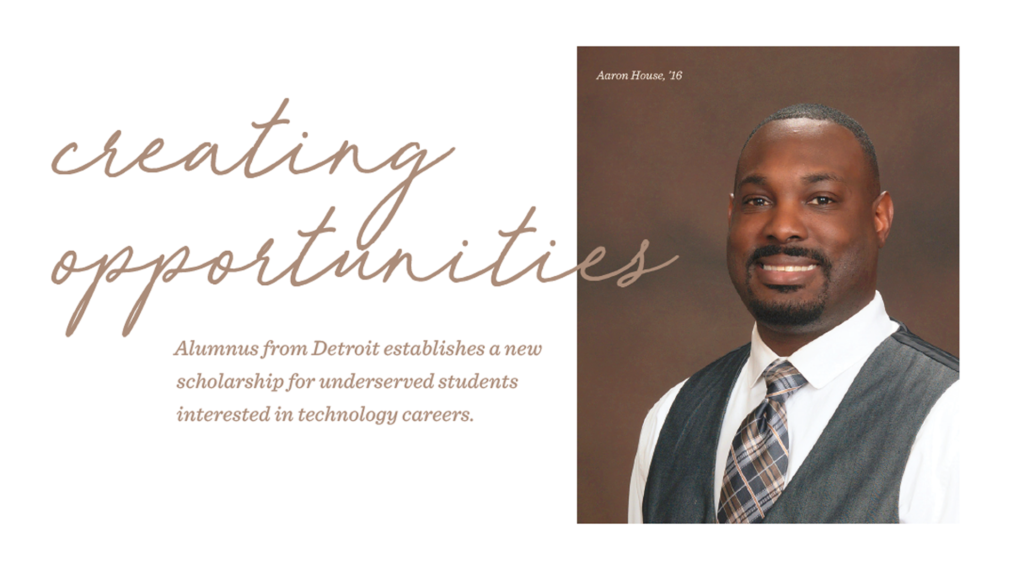 Aaron House, ’16, doesn’t take the generosity of others for granted.

That is why after years of having amazing opportunities and supportive mentors in the IT field, he created a scholarship at Davenport University geared at helping underserved populations obtain jobs in technology.

For House, investing in a scholarship means more than helping students pay for their education. It opens doors.

“There is nothing special about me,” House said. “I am very lucky. I am proud of being an underdog and rising to where I am today. That is why I wanted to start this scholarship and I wanted it to be available to the masses, not just the exceptional. I wasn’t exceptional. I was ordinary.”

House, who grew up in Detroit and attended Detroit Public Schools, found joy in working on computers at an early age.

“Apple Computers were installed at my elementary school and I took to them,” House said. “Then a few years later, my dad bought our family our first PC when I was 10 years old. I merely played games on the computer. Then my interest led me to take it apart and putting it back together.”

In high school, House attended Golightly Career and Technical Center in the heart of Detroit. He spent half of his day focused on typical high school coursework and the other half exploring applications of the Golightly computer repair program.

In 11th grade, a recruiter from the U.S. Army Corps of Engineers took an interest in him. This recruiter, Kenny Dickson, took House under his wing and helped him build his skills and knowledge.

After high school, House didn’t see the value of attending college right away. He continued to work and took college classes to obtain certifications needed in his field.

For over a decade, he led large-scale IT projects, which included traveling to many parts of Mexico and Central America for multiple large companies. Early in his career, a director helped House land a project that helped map his career that followed.

“At that time, I was just a regular person in an entry-level position when Hazem Barghouty approached me about leading a project,” he said. “At first I was hesitant, but he saw something in me and gave me the opportunity to lead this project even though his peers were doubting his decision.”

House said that director is now a mentor who has helped open doors throughout the rest of his career.

“Without him creating this opportunity for me, I wouldn’t be where I am today,” House said.

House’s reputation helped him land the lead infrastructure engineer job at Comerica Bank in Auburn Hills, Michigan in 2014. He wanted to continue to advance in his career but felt that not finishing his bachelor’s degree would discredit his experience and skills in his field. He enrolled at Davenport because of its reputation for degree programs relevant to real-life applications and because it awarded credit for most of his IT certifications, allowing him to advance more quickly towards a degree.

House said he was fortunate to work at a company that offered a tuition reimbursement program to help pay for his degree. But it inspired empathy in him for those who don’t have that luxury.

“For a person who isn’t working or doesn’t have an employee reimbursement program, earning a degree would be a challenge,” he said. “The opportunities I had allowed to me realize how lucky I am. I wanted to give back.”

House created a scholarship to help underserved populations attend Davenport University and consider a career in technology. The Aaron House Future Black Technologist Scholarship will be offered to an African American student from the Southeast Michigan area with a major in technology.

“I thought, if I could make it, others can make it too,” House said. “That is why I decided to give back. I was just an ordinary kid from Detroit who has done some extraordinary things because of the opportunities I received thanks to my amazing support system of mentors, family and friends. I am just paying it forward.”