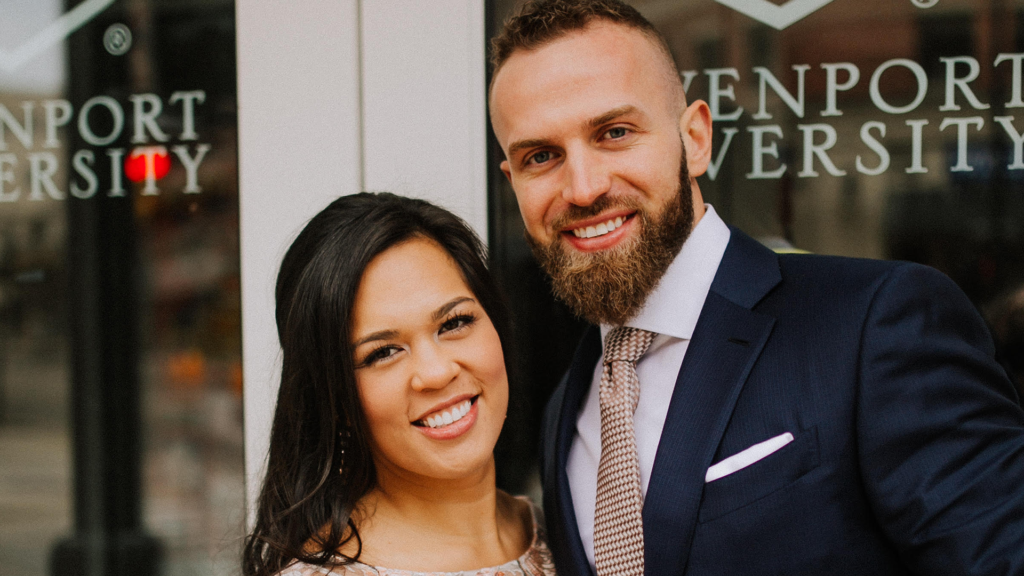 Throughout the week, the DU Alumni Association Facebook page is sharing Davenport Duos stories in celebration of Valentine’s Day. View a sneak peek of the love stories below and follow along on the Facebook page.

“Admir and I met in a marketing class during our graduate program. That class was the beginning of a couple-year friendship before realizing we had feelings for each other right before Admir hopped on a plane to study abroad in China in Summer 2015. We fell in love and tied the knot in November 2017. Admir is currently a financial adviser at R.W. Baird in Grand Rapids, and I am a talent acquisition manager at MarshBerry in Grandville. We both have an MBA from DU. Admir also has his undergrad in finance and I did a post-bac in HR! We love DU!”

“We were a world apart through the first half of our lives: Sam growing up in Amman, Jordan, and me in a small farming town in West Michigan. Somehow, we both ended up in the same EMBA cohort at Davenport University. Looking back we laugh about that day. We both started the cohort late, arrived without having purchased our course materials and were equally nervous about whether or not we could achieve our goals while balancing so much in our personal and professional lives. We both thoroughly enjoyed our time at Davenport and remained friends with our cohort following graduation. Little did we know that life would take us down separate and often challenging roads. A few years after graduation, Sam and I reconnected and we have married shortly thereafter. Today, Sam and I are not only friends but spouses, business partners and parents. Sam and I own and operate Beacon Engineering, LLC, and recently welcomed our first child together. Sam is also a stepfather to my two older children. While our intent was to obtain an advanced degree, a series of chance events brought two people together from across the globe and we gained so much more from Davenport University than ever imagined.”

“Ryan and I met while playing basketball for the men’s and women’s teams during the 2005/06 school year. We have been together as a couple since 2007 and celebrated our marriage ceremony in Jamaica on Feb. 23, 2010. Since being married, we have had three amazing children, Quinton, 7; Hadley, 5; and Sloane, 2, and currently live in Alto with a dog, fish and chickens to keep us busy. Ryan works for Fifth Third Bank, as well as coaches for Caledonia Varsity Boys Basketball, and I have my own photography business. The path we each took to find each other was unique and unconventional, but we realized in a short amount of time that there was something special between us that can last a lifetime as best friends, as a couple, and as teammates through life.”

“During the 2011-2012 school year, I found myself taking finance for the second time. I was a quiet student who typically sat towards the back of the class and didn’t speak up unless I was called upon. On the first day, I sat in silence doodling in my notebook when in walked this man in uniform that went straight to the front row. He immediately started talking to those around him and befriending the professor. He was totally out of my league. However, it did allow me to sit and admire him from the back of the class most of the semester. One day, after being frustrated with a group assignment with another classmate, Jimi and I started talking and he brought up baseball. I told him I had never been or even watched for that matter. He told me that we should go sometime. I politely agreed, despite having a boyfriend at the time, because 99.9% of the time, those types of plans were never followed through with anyways in my experience. To my surprise, he emailed me the next week and asked me to a baseball game in which I had to kick myself and turn him down.

Fast forward to the end of the semester, Jimi was graduating, and I had another semester of classes to work through. On graduation day, Jimi met with his family at Applebee’s and I quickly raced through the McDonald’s drive-thru before heading off to work after class. I suddenly looked at my phone and, boom! A text from the DU stud muffin himself! He had looked out the window of the restaurant and saw me in the drive-thru next door which prompted him to text me. We started talking a lot after that and eventually started dating. I graduated in 2014, we married in 2015 and had a son together in 2016. My husband still tells me to this day that if he hadn’t seen me in that drive-thru, he probably never would have texted me again. I like to joke about the fact that we met in a class that I barely passed (after taking it a second time) and he is in charge of our finances.”

“Kyle and I met in the Davenport Professional Writing (ENGL 311) class at the Holland Campus in the Fall of 2006. We started dating early 2008 and married four years later in 2012. We just celebrated our six-year wedding anniversary! Kyle recently started a job at PADNOS as a logistics coordinator after co-owning a home improvement and remodeling company with his brother for over four years. I work in IT as a senior network administrator at National Heritage Academies and in December celebrated my 10-year work anniversary there. We have a nearly six-month old daughter who is keeping us very busy outside of work.”

“I met Denny the first day of college during Panther Prowl. He was my roommate’s Panther Pack leader. We got married in 2013. I am a real estate agent and Denny works at Farmers Insurance and we also own some investment properties. We enjoy playing beach volleyball, jet skiing and spending time with family in Northern Michigan.”

“While I attended a long time after my husband had graduated from DU, it’s nice to have the connection. I was actually a late-comer to the Davenport family, having started as an employee, then completing my MBA. My husband graduated in the late 1990s. At that time, however, we did work together, so I knew a great deal regarding Davenport. We actually both come from a long history of Davenport. My mother-in-law worked in the Registrar’s office for almost 10 years, my mom graduated with her billing and coding certificate, my sister attends, and my best friend also graduated from DU. So, to say that DU has an even closer place in my heart (beyond my hubby and I both graduating from here, and me being employed here almost 10 years) would be an understatement.”

“We lived on the same floor Nichole’s freshman year. As the school year went on, we grew closer as friends. That summer, Kakha was not able to go back to Russia. I lived near campus, so we started hanging out until we officially became a couple. From there, we grew closer and closer together and more in love. To this day, we grow more in love each day. We have been married for 5 years, moved to Chicago for our careers, travel to exciting, new places, and built a life together.”