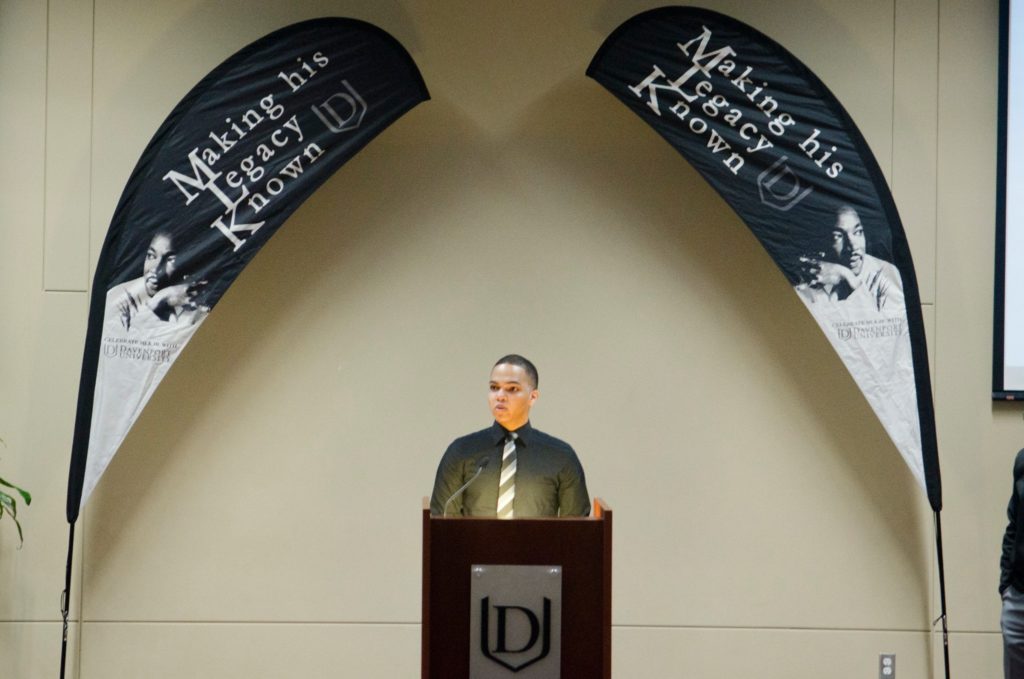 Each year, DU students have the opportunity to enter the university’s MLK Day Essay Contest.

“The contest was a part of speakers, service projects and initiatives planned around the state to honor Dr. Martin Luther King, Jr.,” said Director of Student Life Natalie Wagner. “This is the 6th year we have sponsored the MLK Day Essay Contest at Davenport.”

The theme focused on economic justice, Wagner said. Weeks before his death, King spoke to a union group in New York about what he called ‘the other America.’ He felt that major inequalities existed and he advocated for guaranteed full employment, a livable income and increased construction of low-income housing and public works programs.

The 33 students who entered authored essays about this theme. The essays were judged by staff and faculty, including Rhae-Ann Booker, John Jaksa, Melissa Haswell, Lindsey Shull and Terri Tomaszek.

The top essays were:

Learn more and read their essays:

The following excerpt was taken from a Washington Post article written by Eugene Robinson (2015):

As we celebrate King’s great achievement and sacrifice, it is wrong to round off the sharp edges of his legacy. He saw inequality as a fundamental and tragic flaw in this society, and he made clear in the weeks leading up to his assassination that economic issues were becoming the central focus of his advocacy.

On March 10, 1968, just weeks before his death, he spoke to a union group in New York about what he called “the other America.” He was preparing to launch a Poor People’s Campaign whose premise was that issues of jobs and issues of justice were inextricably intertwined.

“One America is flowing with the milk of prosperity and the honey of equality,” King said. “That America is the habitat of millions of people who have food and material necessities for their bodies, culture and education for their minds, freedom and human dignity for their spirits. . . .But as we assemble here tonight, I’m sure that each of us is painfully aware of the fact that there is another America, and that other America has a daily ugliness about it that transforms the buoyancy of hope into the fatigue of despair.”

Those who lived in the other America, King said, were plagued by “inadequate, substandard and often dilapidated housing conditions,” by “substandard, inferior, quality-less schools,” by having to choose between unemployment and low-wage jobs that didn’t even pay enough to put food on the table.

The problem was structural, King said: “This country has socialism for the rich, rugged individualism for the poor.”

Nearly five decades later, consider how the theme of economic justice is still relevant today. Discuss and provide an example of how you have witnessed economic injustice in modern times. Regarding “the other America” that King referenced, he advocated for guaranteed full employment, a livable income, and increased construction of low-income housing and public works programs. Discuss the impact that these investments could have on poverty and society.

Dr. Martin Luther King Jr. was a proponent of economic justice in the United States – a nation blazoned as a land of prosperity and opportunity. This notion originates from cultural optimism spurred by the American dream. Many Americans realize that the American dream is precisely a dream – often only obtainable whilst asleep. Those whom are socially aware, or ‘woke,’ understand that the economic success of the nation is derived by the masses, yet enjoyed by few. America may be the leader of the free world, but many of its citizens are shackled by economic injustice. The America that I know exists behind a façade; Dr. King referred to this subjugate as “the other America.” If we collectively advocate for economic justice reforms, then the financial well-being of all Americans will improve.

Economic injustice is unbridled in modern America; it is evident in wealth and opportunity disparities, which exist in many forms. I work in the financial services industry and have the pleasure of interacting with the diverse members of our community. One aspect of my job is to speak with clients and prospects in order to understand their financial needs and desires. Most people tell me that they do not possess the wealth or income required to cover their living expenses or provide for their family. The problem is rarely related to mere spending; the problem arises from systemic low wages and the rising costs of living. As a result, many people need loans just to survive or to improve their economic outlook. Nevertheless, loans leave people feeling trapped and can lead to further financial perils. Those whom are denied traditional loans often find themselves trapped in the vicious poverty cycle or fall victim to predatory lenders. This is just one aspect of our society that hinders “the other America” and allows economic injustice and inequality to flourish. Dr. King addressed these issues and others by championing economic reforms.

Dr. King garnered support for several economic justice reforms. He believed in adequate employment for all and affordable housing. Full employment would capitalize on the potential of all people; it could be created through public work programs and public-private partnerships, thus benefiting society twofold. Additionally, changing the minimum wage to a livable wage would provide relief to those whom are living between paychecks or are financially insolvent. Furthermore, increasing the availability of low-income housing would relieve the financial burden of shelter that many Americans face. Fairness and justice are two principles I believe in strongly; these reforms would lessen the unfair impact of poverty that afflicts our society.

We cannot overlook economic injustices. Time alone will not erode the grasp or effects that poverty and financial duress have on society. Following Dr. King’s example, I encourage you to peacefully advocate for social change. I am optimistic that we can create an economy that truly emboldens the meaning of liberty and justice for all.

Economic justice continues to be an important topic of discussion in the present age, despite the attention Dr. Martin Luther King, Jr. brought about it many years ago. Whenever there are different classes of people separated based on finances, social status, and ethnicity, unfortunately there is the likelihood that economic injustice will occur. This is not to say that the wrong is intentional or unintentional. Regardless of the reasoning, this is something that is bound to happen sooner or later. Individuals who hold key positions of decision-making can effectively and progressively make more opportunities for the less fortunate to enjoy a better quality of life.

Rental housing is a sector of the economic system that is prevalent with economic injustice for the poor. Some of these business owners have a tendency to rent out properties that are unfit for them to live in, yet they have the audacity to allow a tenant to occupy the property. Tenants who are prime targets are usually individuals who have bad credit, negative rental history or on state aid. On a personal note, I have witnessed family members living in adverse housing situations, some of which were a safety hazard. For example, missing or broken steps, unleveled floors, and broken heating system.

Guaranteed full employment, a livable income, and increased construction of low-income housing and public works programs could impact poverty and society. Guaranteed full employment could help individuals rise out of poverty to become self-sufficient, yet it would increase the burden on businesses and society to generate the funds necessary to sustain the increased workforce. A livable income could help to minimize the poverty rate and provide an individual with the self-esteem necessary to live a productive life; however, a livable income would vary from person to person. Who in society would determine what a livable income consists of?

Would it be unbiased? Construction of low-income housing and public works programs would provide individuals with better housing options and give individuals better opportunities to improve their quality of life through better schools access and recreational programs. On the other hand, it could cause property values to diminish in neighborhoods and become a breeding ground for an array of illegal activities such as drugs, gang violence, prostitution, and human trafficking. Nonetheless, these investments could help inspire these individuals to bigger and greater things in life also, which would make this a better and brighter world.

In conclusion, economic justice is something that is still evident in the present age. It is something that has managed to stay alive throughout the years, and a topic that will undoubtedly be analyzed for years to come. Despite any advancements that have taken place to address this topic, there is still a lot of work ahead to make a significant impact on poverty, as well as improve society.

As an international student, from Ireland, having studied Martin Luther King in secondary school, I was aware of the context behind the speeches he made and what racial segregation had done to America in the 1960’s and before. It was extremely relatable to me as growing up in Belfast, we too had our struggles over segregation and advantageous preferencing with the Protestant and Catholic divide.

Nevertheless, my understanding of economic injustice in America, especially in 2015, was completely unknown until I visited America. My thoughts before experiencing America were that racial segregation, discrimination and the legacy of the Jim Crows laws were all a thing of the past. This I’m afraid to say was sadly mistaken.

I visited New Orleans, Louisiana in January of 2015. This was an eye opener to say the least! As King states, ‘the other America’ was shocking to see. The predominately white areas of New Orleans were amazing; viewing the French Quarter along with all the old streets that surrounded it. However, the secret to New Orleans which nobody talked to me about was the ninth ward. This was a predominately black neighborhood that had been virtually left untouched after Hurricane Katrina. The economic injustice was clear to see; a whole neighborhood left the same devastated way nearly 10 years after the Hurricane hit, yet, a few hundred meters away, every single predominately white area had signs of repair and infrastructure implemented to it.

It made me physically sick to see that the colour of your skin, a simple genetic pigmentation could cause such injustice. This injustice had then influenced the employment, education opportunities and life outlook for these young African-American people.

If Kings ‘other side of America’ was untrue, I wouldn’t have experienced first-hand the social and economic injustice’s I saw. If equality existed beyond the colour of your skin, and economic justice would prevail, these young African-American boys and girls could grow up with the knowledge that their surroundings, their infrastructure and their lives would not be influenced by a simple birth right, but instead what they choose to do with their lives themselves on a level platform.

To conclude, a simple investment in the short term on the basic principle of equality will always profit a nation and area in the long run. This infrastructural investment upon an area, to offer the same starting place in life, should be every child’s birth right. The societal and economic statuses of these people would only benefit, as these areas would be rejuvenated and the people born and raised in these areas would seek college and employment without feeling discrimination from birth. Hatred is not born into anyone, it is instead a result of your surroundings – kick out these injustice’s means you kick out the hatred, and it results in an end to the social and economic divide America struggles with today.