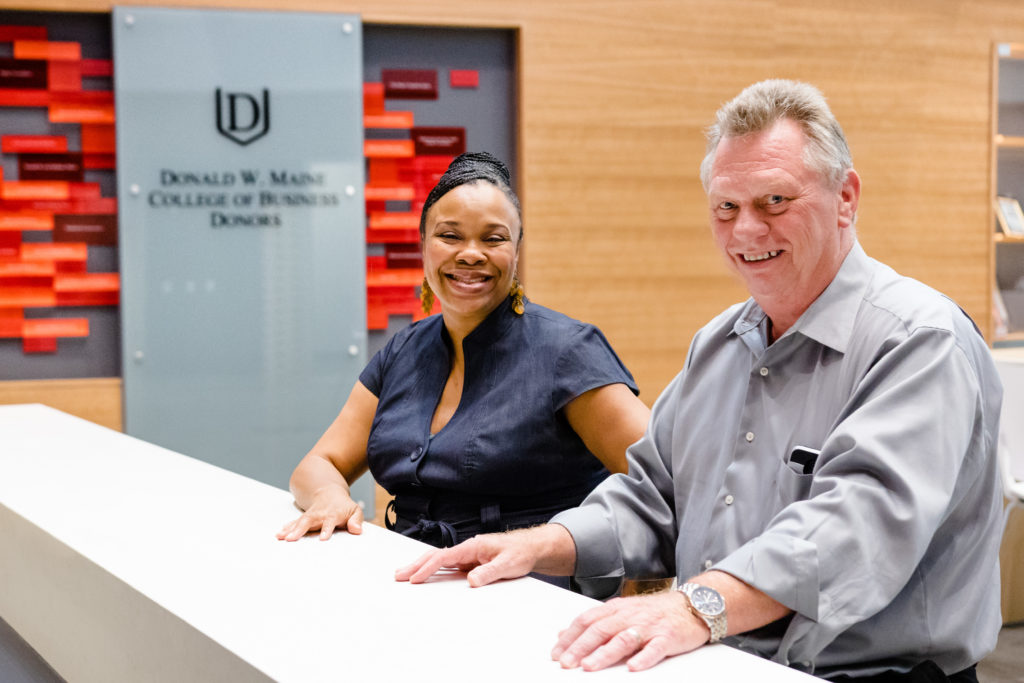 Christina Flowers, ’17, learned how to launch her new magazine from Steve Bayus’ class that blended real-life teachings and storytelling to inspire hands-on learning.

Christina Flowers was born and raised in Grand Rapids and always experienced success in her career. And after being laid off from her corporate marketing job of more than 10 years at a worldwide propeller manufacturer, her passion took over and she began to work for herself.

“At first, I was working day and night as a freelance graphic designer, contractor and basically anything I could get my hands on,” she said. “During my spare time, I hosted a ladies tea event for pastors’ wives and women leaders in ministry. After the event, I would write articles recapping the inspirational stories that were shared about the role of women in the ministry. Women from all over were interested in my stories, which inspired me to create the WBM Magazine: The Women Behind the Ministry.”

After nearly five years of developing strategies, writing and laying out the magazine, Flowers became stuck.

“I didn’t know how to produce the magazine, what my finances needed to look like or where I was going to get the money I needed to fund the project,” she said. “That is when I knew I had to go back to school to get my MBA.”

For many, returning to school to pursue an MBA after being laid off can be challenging, especially for those who are adventuring into entrepreneurship like Flowers.

Bayus and Flowers first met in the winter semester of 2017 in a master’s level marketing course. She recalls that time as a turning point for her business.

“Steve brought real-world experiences to life in class. My whole perspective shifted,” she said. “I was designing a magazine based on what I wanted it to be like, not my target audience. Steve challenged me, which caused me to stop and evaluate my business. I needed to see it from the perspective of the target customers. My thinking completely changed.”

Flowers had the passion, product and belief. But her perception of what made it go was absolutely wrong, Bayus said. Through his class, she was able to apply all the textbook theories by walking through real-life situations that she could apply to her business.

“That is what I love,” Bayus said. “If I can positively impact someone I care about is what makes all the difference for me. Whether it’s Christina’s business or someone else in the class, I customize my teaching approach for each student. We are all unique, especially Christina.”

Flowers officially launched The Women Behind the Ministry magazine in August 2017. She also started a scholarship fund, Single Parents Continuing Education, to aid single mothers and fathers of children in grades K–12 who are pursuing a college degree or training program.

“After earning my MBA, I am more open-minded,” Flowers said. “That MBA experience enhanced my life and changed my thinking. Learning from others in the class was one of the most rewarding and fascinating benefits that I didn’t expect. It changes you.”

Growing up in a challenging urban inner city environment, Bayus learned at an early age how to hustle. He advanced a grade twice during school and moved out of his parents’ house at the age of 16.

As a young entrepreneur, Bayus was 13 and his brother 16 when he started his first business selling ice cream out of a converted gas station on a street corner.

“Business was great for the first summer, until Dairy Queen stole our idea and filled the bottom of the cone,” he jokes. “They put us out of business.”

Even though he finished high school early and near the top of his class, he did not go to college. Bayus joined the U.S. Air Force and quickly gained the confidence and abilities to be a leader. Early in his career, the only people who let him run businesses were the people whose businesses were failing, he said.

“As the new guy, I thought my role would be to bring a new perspective to the business,” he said. “But, in reality, I was just their scapegoat for everything that was going wrong.”

Bayus felt like he had something to prove — a chip on his shoulder — as a result of his life in Cleveland, Ohio.

“My first assignment as a quality manager was to testify in court because the company’s product was causing roadways to explode,” he said. “The company needed someone to take the blame for a lost lawsuit. I called everyone with expertise to get as much knowledge and information as I could about the problem, solutions and contracts — and we won all the lawsuits.”

With these results, Bayus became sought after for his ability to turn around and revitalize small companies. He shared his insight with thousands of manufacturers and students at universities in China, won awards and was recognized as a turnaround expert in the Chinese culture.

An industry expert with 20 years of experience under his belt, Bayus’ greatest accomplishments involved his ability to connect with and teach people. His turnaround success was rooted in the power of motivating and empowering people — insights he learned over years of work.

Even with these accolades, his return to the United States meant that he would need to earn a college degree to establish credibility and teach. While traveling the world and running small businesses, Steve pursued his bachelor’s degree when he was 46 years old and then his Master’s in Business Administration at the age of 53.