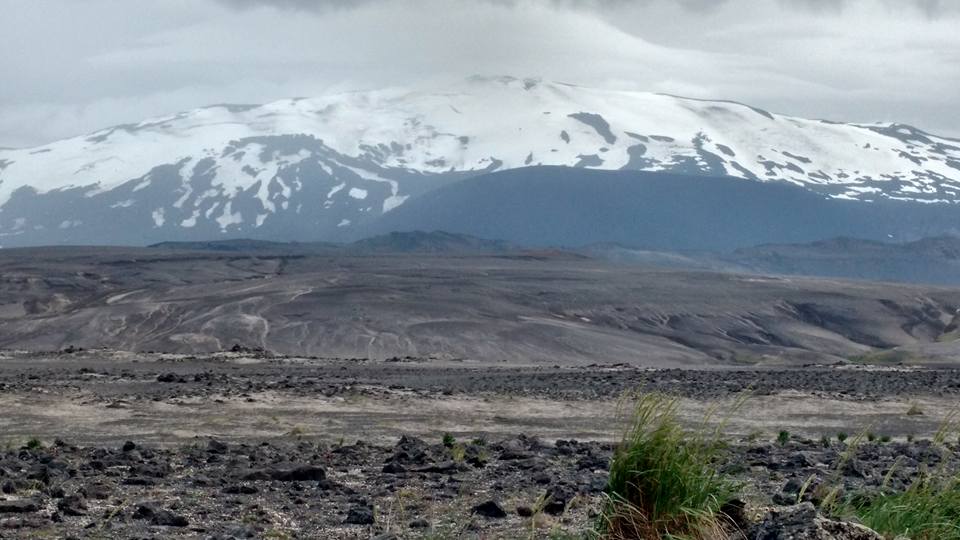 During the next few weeks, Associate Professor Chris Hamstra is teaching several sessions on leadership and communication (Authentic and Servant-leadership, leadership life-stories, etc.) at Bifröst University in Iceland. Chris is documenting his time in Iceland in a series of articles to be featured on his LinkedIn page.

This is the fifth article in the series.

Well…we could always be in Hoboken.

Most conferences and learning events, in an attempt to maximize knowledge gain and Return on Investment (ROI), advertise all day sessions that keep attendees in a closed, windowless, sterile room until evening. Most of the events from my professional life, in and out of higher education, have followed this format. I even wrote and delivered training material with this mindset!

Being honest, one of the reasons that I appreciate my discipline specific conferences like the National Communication Association (NCA), and the International Leadership Association (ILA) is because of the variety of yearly conference sites. Even the Michigan Academy of Science, Arts & Letters (MASAL) moves from campus to campus.

I prefer learning that successfully balances BOTH the learning and the location.

So here is the story. I attended a conference where the “official” meetings ended around mid-afternoon. The leader of this conference explained that the early end time allowed attendees the opportunity to be collegial, get outside, and explore. He finished his summed up perspective with: “We could always be in Hoboken.” His thought was that as autonomous learners it was important for our continued learning to get out and engage the sights and sounds of the area.

My bride joined me late last week. After a day of facilitation at Bifrost University we have taken some time in the evening while to explore the local area. We are currently taking some PTO time to further explore the land of fire and ice. Following are some pictures and my quick thoughts. 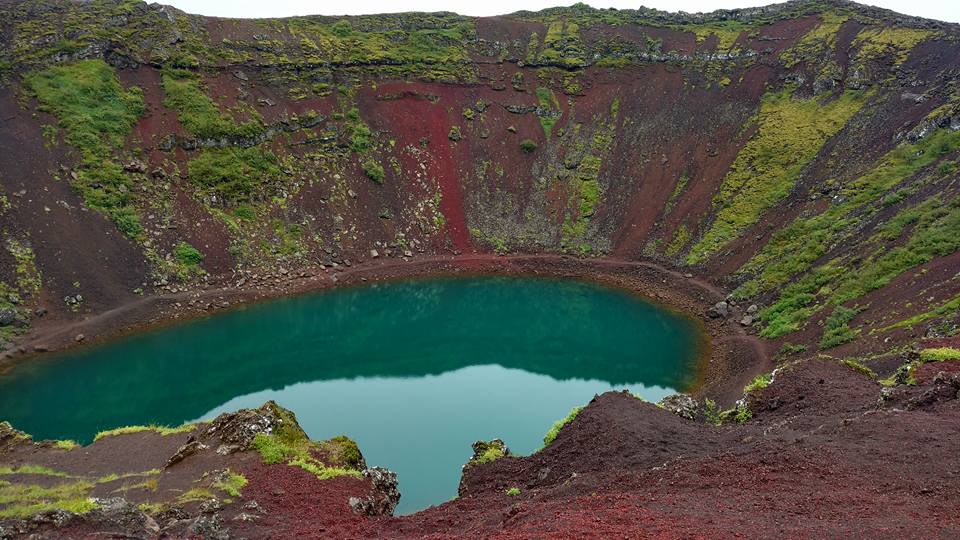 The country sits on top of the Mid-Atlantic ridge and by most accounts there are about 130 active and inactive volcanos. Our current location in the southern area of Iceland is within sight distance of Hekla which last erupted in 2000. Translated into English the name means “the gateway to hell.” In fact, just a few weeks before my travel an earthquake rocked this area and several articles were published saying that the volcano might be ready to go again. I am thinking that I should have done a better job looking at the cancelation policy (smile)!

In addition to Hekla, we stopped by two different volcanos, Kerio and Grabrok, to walk along the lava flows and see the differences in the geographic features.

Melting water from long ago glaciers and the continued water flow from current glaciers continue to form the geography of this country. Heavy rains can also play an impact. In fact, I am writing this today because the road we had hoped to use to go hiking is closed because of flash floods. Campers are being “strongly encouraged” to make alternative plans. So our plans are changing (smile).

One of the neat adventures has been seeing the cold and hot springs that dot this landscape. Hot springs, heated by magma chambers under the earth, dot the landscape. We stopped by two areas to soak in the natural hot tubs. 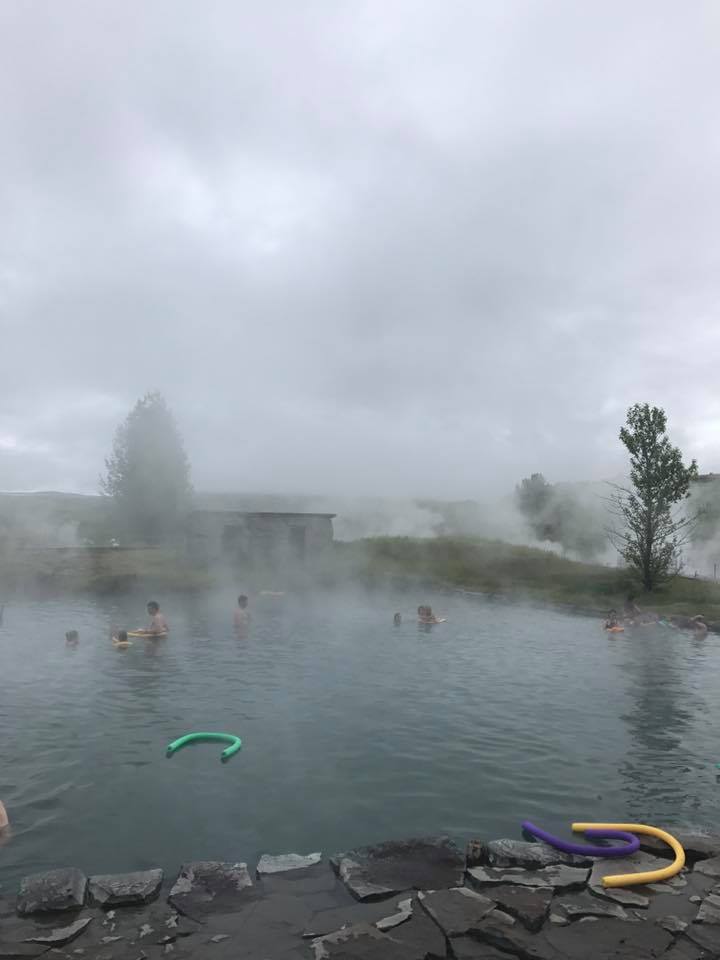 The Secret Lagoon (Left) has been in use since 1918 and is considered the oldest swimming place in the country. The picture you see below are the pools near Grettislaug. Yes it was cold. The day we visited the temperature was around 40 degrees, wind was blowing at 10-15 miles per hour, and there were sprinkles. More importantly I had a blast! We were close enough to hear the pounding of the waves.

The awe-inspiring discoveries have been the waterfalls. Gullfoss is one of the “touristy” spots of Iceland but the one place that I have envisioned in my mind’s eye. A live webcam has been set up. The pictures do not do justice to the sounds of the water flow and the feel of the spray.

The Hraunfosser is a combination of two different falls. This section covers about ¾ of a mile. The water flows from underground springs and spills from under the lava rock into the river. 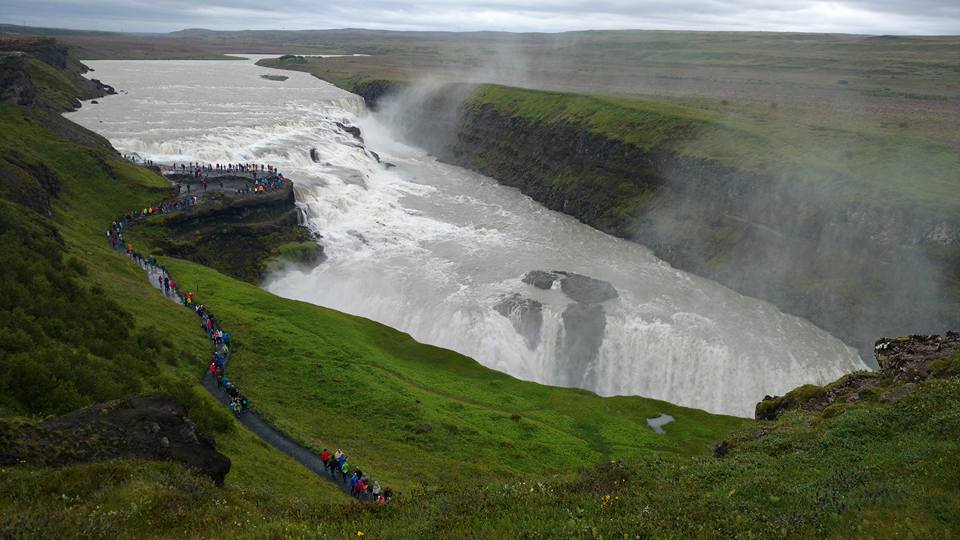 By most accounts the population density of Iceland is one of the lowest in the world. The total population of the country is around 330,000 with about 200,000 living near the capital of Reykjavik in the Southwest. As you travel the country there are times that the sheep density outnumber the people density in an area (smile).

I would like to finish up with this thought learned from my former supervisor Al Walczak. He helped me to enjoy the process of learning. Al frequently encouraged me to take my foot of the acceleration pedal, take the extra day of PTO, and get out to enjoy the place. For me, there are times in my journey of leadership and learning that the experience is important. This is one of them.

I hope the pictures inspire you to dream of new places to explore and new discoveries to see.

We could always be in Hoboken!