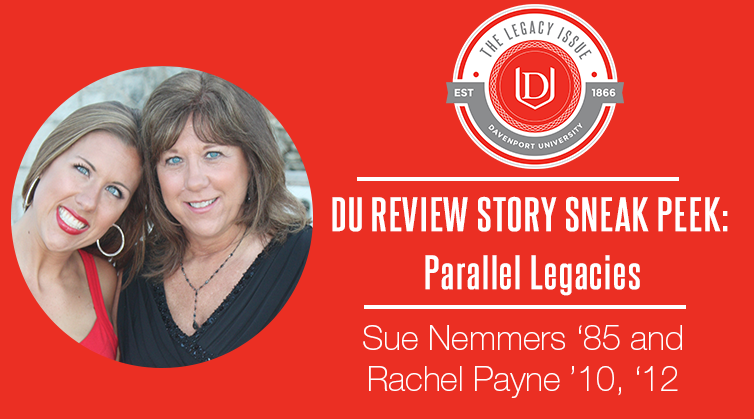 For Susan (Kitzrow) Nemmers ‘85, Davenport University is a special place for two generations of her family. “Both my daughter, Rachel, and I started at Davenport in pursuit of a business education but gained so much more. Though we attended 25 years apart, we gained very similar experiences, friendships and a foundation for our success. It is our home.”

Sue started at Davenport after high school to pursue her associate degree in the executive secretarial program, with the help of grants and scholarships. She worked on campus as a work-study student to help in the alumni and development office. After graduation, she accepted a full-time role as the first alumni director of Davenport College. She admits, “It was amazing that Davenport took a risk, hiring me as a 20 year old.” Sue was responsible for growing the alumni association, running the phonathon program, hosting alumni events, creating marketing materials and managing the alumni board.

“It was the best job,” Sue recalled. “It was truly a grassroots effort and the University supported me one hundred percent. We had an alumni holiday party in my parent’s basement.”

Sue worked in the alumni office at Davenport for five years and was concurrently a member of the first class at Davenport to earn a Bachelor of Business Administration degree in 1985.

Almost 18 years later, Rachel (Nemmers) Payne’s ’10, MBA ’12 journey at Davenport mirrors her mother’s. Rachel started at Davenport in the fall of 2006 after receiving the W.A. Lettinga Full-Tuition Charter Scholarship. “At first, I was interested in becoming a collegiate cheerleader and I knew Davenport didn’t have a program yet. I knew my mom had a great experience at DU and realized how impactful the full-ride scholarship was to my future. I couldn’t pass it up.”

Almost immediately, Rachel became an advocate for a new DU cheer program. As a sophomore, she created proposals, wrote plans and met with the Athletic Director, Paul Lowden, about starting a cheer program. Rachel recalled, “Looking back, I can’t believe I was that persistent!”

Her persistence paid off in February of her senior year when the head cheerleading coach position was posted. She interviewed and earned the head coaching role in early spring. During this time, Rachel was a work-study student in the Human Resources department working in training and development.

“It was perfect. After I graduated with my BBA in 2010, the HR department hired me as a student worker. I was able to earn my MBA as a full-time student, hone my HR skills as a part-time intern and grow the program from the ground up as the cheer coach.”

Rachel spent much of her time promoting the program and recruiting cheerleaders, taking time to be selective and build the legacy of the program effectively. Rachel enlisted her mother to help her with the program too. “Mama Sue” traveled with the cheerleading team as they competed regionally and nationally.

During Rachel’s six-year tenure as the cheerleading coach, she led the program to three national championships. “The best part about my time coaching at Davenport was seeing all of the athletes continue their passion for the sport of cheerleading at a school that was extremely supportive of the program.  Davenport took a chance on me when they hired me to start the program from the ground up.  I am so proud to see the legacy and success of the program continue on with some of the most talented coaches and athletes in the country.”

Today, Rachel is a human resources professional at Spectrum Health and Sue is an active community volunteer. Both serve DU in mentoring roles as well as staying active with the Alumni Association by attending events and activities. Because Davenport was such an integral part of Sue’s formative years, she and her husband, Dave, decided to leave a portion of their estate to Davenport in their estate plans.

“It is amazing how alike Rachel and I are,” Sue said. “Our relationship has grown stronger because of our ability to relate and reminisce about our similar paths at Davenport.”