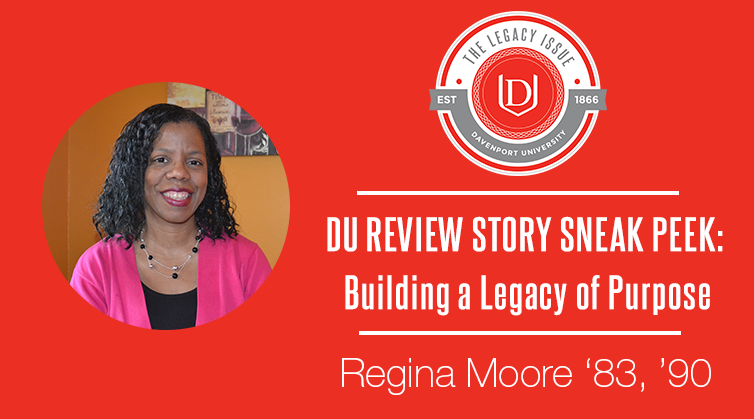 Regina Moore was born in Boston into poverty, turbulence and uncertainty. Statistically, her odds of breaking out of the cycle of poverty were slim, but determination and grit were on her side. Regina found promise at Davenport University and changed not only her own life forever, but the lives of her entire family and the next generation.

At age 5, Regina became the ‘only parent’ to her siblings when their mother abandoned them. They were taken in by a previously unknown grandmother. Instability marked her early childhood as she moved from home to home. At times Regina cared for her younger brother and sister while a guardian worked. By age 8 and for the next five years, her and her siblings were in foster care. Through the chaos of multiple homes, Regina found serenity and purpose in school.

“School became my haven at an early age. Whenever there was turmoil or uneasiness at home, I would go to the library and read book after book. Then I would go home and make my brother and sister play school with me,” Regina said. “I was the teacher and we went through many math problems, as it was my favorite subject. I sought refuge in school.”

Regina excelled in her studies. In the tenth grade, she was selected to be in the advanced honors English course. One of her assignments was to write a story about her life. “I was only 15 at the time,” Regina recalled. “My teacher pulled me aside after reading the paper and asked me if it was true.” Her story was honest. Regina wasn’t sure why he had asked. It was just the story of her life.

The teacher encouraged her to share her story to inspire others. Regina said, “That was the first time I realized my story was not like anyone else in the class.”

The next year, Regina became a teenage mom. She graduated from high school one year early and held the title of highest GPA among minority students which helped her receive a full-ride academic scholarship to college. Sadly, when administrators discovered that she had a baby, her scholarship was revoked and she was unable to begin.

Now 17 years old and one month after graduation Regina moved out of her adoptive parent’s home and got a job working as a nurse’s aide making $2.65 per hour. “Though, it paid the rent, I realized that job wasn’t going to provide for my daughter the way I wanted to. I knew I had to go to college. My adoptive parents never talked about college. If it wasn’t for my high school counselor, I would have had no idea what college was.”

A year later, at 18 the universe handed her a sign. She received a Davenport College pamphlet in the mail and told her two-year old “let’s pursue computer programming as I think computers are going to take over.” Regina also added a major with accounting.

“I called the number and spoke with admissions representative, Mary Kay Bethune of Davenport College. She helped me fill out the paperwork and find financial assistance through grants and scholarships. She was my saving grace.”

In her first semester of college, Regina gained custody of her 15 and 16 year old brother and sister. While maintaining a steady 3.07 GPA, she worked full-time and raised her daughter, as well as her 15 and 16 year-old siblings.

Regina’s conviction to her education spilled over into her personal life. She remembers two conditions she set down before she married her daughter’s father, “First, I told him that no matter what, I am going to finish school on time. And secondly, I don’t iron.”

She earned her associate degree in computer information systems and programming in 1983. Six years and three more children later she separated from her husband.

Regina, states she made the conscious decision to not raise her kids on public assistance but decided to earn her bachelor’s degree in accounting from Davenport to support her family. She worked full-time during the day, went to school at night, and tutored other students.

“Education was my family’s escape. I remember us studying as a family together. I learned at a young age that no one could take my knowledge away. They could take my home, my stuff, and everything else I had, but not my knowledge. We found our purpose in knowing that knowledge would allow us to take care of ourselves.”

After Regina graduated with her bachelor’s degree, she moved her family to Atlanta to pursue a career as Staff Accountant at National Linen Service, a Fortune 500 company. She was promoted to Systems Manager (combing both degrees) after speedily learning the companies’ new financial system. Next, she was recruited by The Home Depot corporate headquarters to be the Senior Financial Systems Analyst. Where she managed the Financial Systems Department, which included supporting nearly 2,000 accounting personnel.

“My job at Home Depot was the best job I had ever had. But, but the dedication to work conflicted severely what was best for my family.” Regina moved back to Michigan so the boys could participate in sports with help of their dad. She started working at Meijer as an internal auditor and then moved to the IT department in which she helped to write the programs for the first gift card system. Concurrently, Regina started her own accounting and tax preparation company called Accurate Accounting to earn extra money for her family. Her business boomed and she left Meijer to pursue entrepreneurship full-time.

Regina made sure to teach her four children the value of the education that she had received. One by one, she watched as they graduated high school and pursued higher education. Her eldest daughter, Tari earned an academic scholarship to the University of Michigan and graduated with a Psychology degree, and worked as a foster care worker in the same county that Regina had been a foster child. Her second daughter, Mari, graduated from the University of Georgia with a degree in Textile Design and moved home after college and work for Regina’s accounting business. She fell in love with accounting and decided to earn a Master’s in Accountancy from DePaul, her CPA license and most recently earned a Master’s in Tax from Illinois University and now works at Ernst Young in Chicago. Donte, her third child, earned an Associate’s degree from Harold Washington College in Chicago, in his 12th year at UPS and a Sunday school teacher. Emmanuel, who recently married DU alumna Kelsey Chambers, went to Western Michigan University and is currently in his 10th year at West Michigan’s Stanley Steemers as a Senior Team Leader. He also aims to attend seminary to become a youth pastor.

Regina’s heart for educating children spilled over into the community as well. Her youngest child, Emmanuel, best friend RaSaun Knight needed a more stable home life and moved in with them while in high school. He was encouraged and inspired by seeing that all his friends’ siblings went to college. He graduated from the GR Police Academy through GRCC. He is a current student at Davenport majoring in Business and Technology Project Management.

“The morning that I realized I was taking, Emmanuel, my last one, to college, I cried happy tears. I fell to my knees in joy and thanked God. I did it… I broke the cycle.”