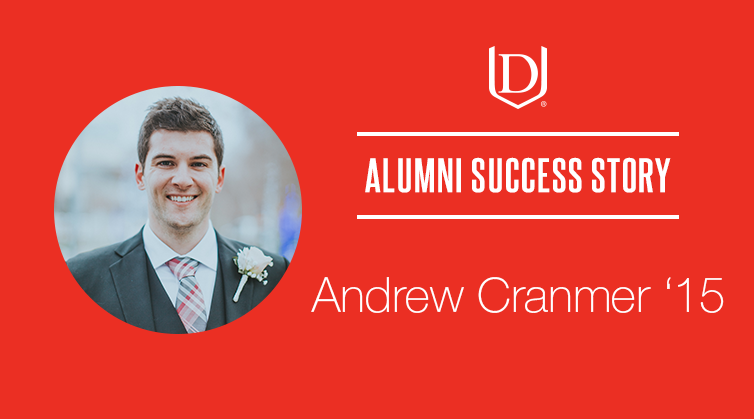 Many of the details about Andrew Cranmer’s job at the Space and Naval Warfare Command System Center Atlantic Branch are classified, but his general role is scientist. He mainly works on projects relating to machine learning, computer vision and biometrics, similar to his courses of study at DU. Read more about Andrew’s journey to the Department of Defense below.

Drew is from Belding, Michigan and chose Davenport University initially because of its location close to home. While a student, he worked as an RA for two years and played rugby for three. He is currently completing his last semester of master’s coursework at Southern Methodist University while working in Charleston, South Carolina for the Department of Defense.

Many of the details about Drew’s job at the Space and Naval Warfare Command System Center (SPAWAR) Atlantic Branch are classified, but his general role is scientist. He mainly works on projects relating to machine learning, computer vision and biometrics, similar to his courses of study at DU. “Basically, if a project comes up that needs a computer scientist who has skills in these areas, I can be pulled into the project,” he says. “I can do anything. Programming, research & development… I like to figure out better ways to do things.”

He says his concentration on biometrics at DU set him apart from the crowd and helped lead to his current line of work, but he did not always know this would be his path. “Growing up, I had absolutely no idea what I would do until I got to Davenport,” he says. “As I got further into my program, I really started to enjoy it. Then I started questioning what I could do with the degree and found a mentor in Denny Bobeldyk.”

Drew credits Denny’s investment of time in him as the main reason he continued and succeeded in computer science. Denny also encouraged Drew to apply for what would become a life-changing scholarship with the Department of Defense (DoD). Initially, Drew didn’t think he had a chance at winning and felt daunted by the long application process. With Denny’s help though, he grew his confidence and wrote about his studies in biometrics because he knew that DU is one of only a handful of schools in the nation that offer the program. He was accepted into DoD Information Assurance Scholarship Program (IASP).

Now, he says, “I would tell students to not let fear keep them from doing things. Apply for everything. This opportunity shaped my whole career.” Though he is proud of receiving the DoD IASP scholarship while at DU, it was also scary to accept because the opportunity meant that he would work for the DoD- and he could be sent anywhere in the world where the DoD has employees.

He feels fortunate to be stationed in Charleston, where he is experiencing warmer winters and a new culture, but it was scary at first. “Coming from Belding, Michigan, I hadn’t really ever been away from home,” he says. “It was nerve wracking to pick up and move 1,000 miles away all by myself.”

Drew enjoys the tangible, hands-on work he does because he sees results. His ultimate goal, though, is to become a CIO or CTO by spending the time to learn the technical aspects of the computer world and later move into the leadership and management roles. He enjoys working with people and models his work ethic after his grandfather, a small business owner in central Michigan who also served as a father figure. He also credits his wife, Becky, with significant influence in his life, “She encourages me, pushes me, and makes me want to be successful.”