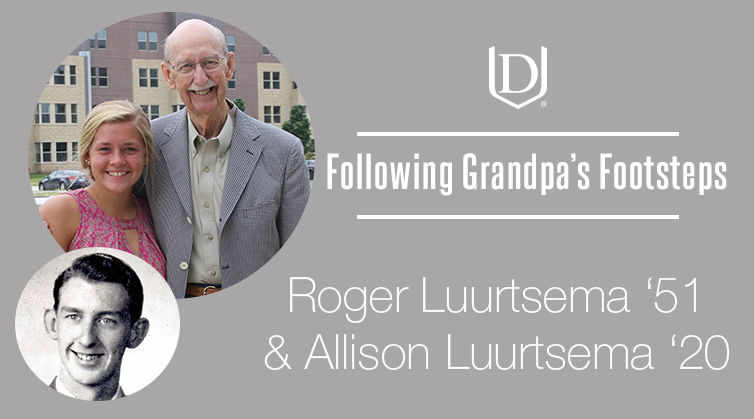 “I chose Davenport because I wanted instruction that was practical and directly applicable to my career,” Roger Luurtsema explained.  Now, nearly 65 years later, his granddaughter Allison Luurtsema is following in his footsteps; eager to learn and grow at Davenport.

Roger was born to Peter and Lillian Luurtsema in their Grand Rapids home in 1932 and graduated from Ottawa Hills High School. He knew he wanted to go into sales because he had uncles he admired who were salesmen and because he had “the gift of gab” and a sense of humor.

He enrolled at Davenport after high school in 1950 and still recalls that many of his instructors left a lasting impression.  Like instructor Andy Anderson, who tricked a shy boy into overcoming his fear of public speaking in the Dale Carnegie class or the commercial law instructor who was a lawyer and also an artist and illustrated principles of law with cartoon style drawings.

“Our class was very close and had a lot of comradery. We were on the second floor of the Fulton and N. Division street building. The first floor had retail stores and a restaurant where we often socialized over coffee and donuts,” Luurtsema reflected.

He appreciated that his classes were always led by people who were successful in their professional fields.  Roger remembered Robert Sneden as a good teacher who was professional, sophisticated and businesslike and added that, “we were all in awe of Mr. Davenport.”

“I am happy with my choice of attending Davenport,” said Roger. “Throughout my forty-five year career in sales, the fundamental principals were the thing that carried me through and that show the quality of the training.”

Roger earned his diploma for completing his salesmanship course from the Davenport-McLachlan Institute in 1951. He married five years after graduating from college and moved to Ann Arbor, MI to start his long, successful career.

Roger worked at a few different companies before settling in at EcoLab where he spent more than 33 years as a salesperson with a territory spanning from Lansing to Detroit. He also found success in translating his education and experience into training other salespeople.

During this time period, Roger and his wife, Wilma, started a family. They have five children, fifteen grandchildren, seventeen great grandchildren and more on the way.

One of his granddaughters, Allison Luurtsema, started at DU in the fall of 2016. Allison grew up playing soccer with her father, Phil, who also spent many hours on the soccer field as a kid. “She has won all the awards you can win, including the top female athlete of her high school,” said her proud grandfather.

When it came time to look for colleges, Allison knew she wanted to play soccer and pursue nursing. One of her coaches recommended Davenport. As her family researched options, Roger showed her a promotional piece with his photo on it from his days at Davenport.

Roger’s experience sparked Allison’s interested in Davenport. “I think it is a great connection to have with my grandpa. Similar to my connection with my dad and soccer, I am able to follow in my grandpa’s footsteps at Davenport, building a family legacy.”

Allison’s first year as a Davenport University nursing student at the W.A. Lettinga Campus is off to a great start. Soon, she will have stories of her own about teachers, student life and classwork to share with her family.