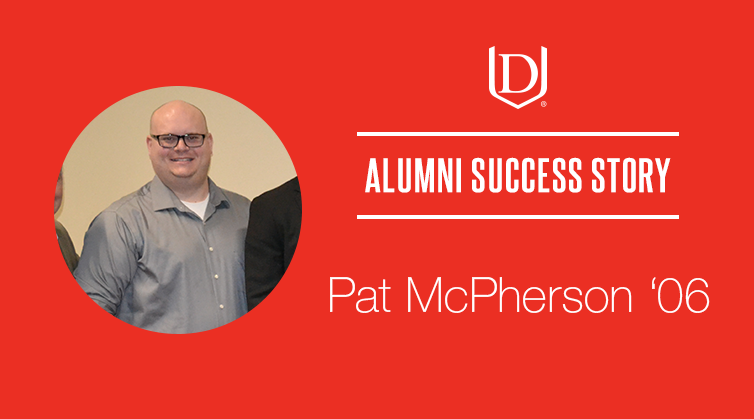 From stump grinding to mopping factory floors, Pat McPherson ’06 has had some dirty jobs. But, thanks to his interest in IT, Pat pursued education at Davenport University where he earned his BS in Computer Networking. Now, Pat leads a team at ITS Partners as a senior sales engineer solving IT problems for clients all over the world. Learn more about Pat and his journey to ITS below.

Tell us about yourself, Pat!

I am from a little farm town called Lakeport, Michigan. Growing up my plan was to be a truck driver just like my dad. However, my high school received its first computers during my senior year and I fell in love. I took a few computer classes at the tech center where I learned Cisco and Oracle. After high school, I went to DU because of its reputation of training excellent IT professionals. My road to graduation wasn’t easy – I had to work many dirty jobs to help pay for school. Overall, my time at DU was a great experience and I graduated in 2006 with a BS in Computer Networking. Now, I work at ITS as a senior sales engineer.

You mentioned you worked many “dirty jobs.” What are some of the jobs you worked?

Well, money was tight and I had to pay for school. My first “dirty job” was working for the Lakeport Market and was the “human” bottle sorter before the pop can machines came out. Next, I moved on to Meijer and worked as a pop can machine cleaner. Looking back, I do not know what was grosser, sorting the bottles from the plastic bags at Lakeport Market or cleaning the pop can machines at Meijer. At the same time, I worked at our family business doing stump grinding. Next, I worked at the Lakeport State Park for a summer, mowing lawns, weed wacking, digging out fire pits, and cleaning the bathrooms and showers. Finally, my dad got me a job mopping the floors at a local factory. I would go to class Monday – Thursday, and then drive to Detroit and work Friday, Saturday and Sunday. I mopped the factory floors for four years until I finished college.

From driving truck to IT, why did you pick Davenport?

I went to Davenport because I was interested in technology. As soon as I got to Davenport, my experience was exactly what I’d hoped. I had some amazing professors. Nancy Hanson was awesome and I took all of her Cisco classes. I enjoyed the Microsoft classes with Ron Draayer and programming classes with Pete Anderson.

How did you get a job at ITS?

My professor, Nancy Hansen had connections at ITS. She told the whole class to apply for their entry-level engineer program, which took students interested in IT through an extensive training and externship process. I had my first interview and then six months later I was asked to come in again. The second time they were not interested in my experience and said that they could not hire me. I was pretty bummed, so I went home and continued to work has a stump grinder. I had enough money for about two weeks. But, I got a call a few weeks later saying I got the job! Luckily for me, the CEO, Wade, insisted that they hire me. Wade really like my story of persistence, especially the stump-grinding story. I was the only person out of the whole class who got the job.

In a nutshell, what do you do now?

I have held a few positions at ITS. I started as a junior engineer, moved up to a engineer and instructor, then to senior engineer. I mainly focused on computers that needed updates or programs installed.  As a junior engineer, I would deploy computer systems to companies that had around 100 computers at a time for one client.  Then I worked my way up to senior engineer and would deploy systems management tools to enterprises that would consist of over 100,000 computers. I went from working in the bottle department at Meijer to later doing their systems management deployment across all their stores.

I moved into as sales engineer role about five years ago and was recently promoted to a senior sales engineer. In this position, I meet with clients and learn about their problems and try to come up with solutions. Before I was the one implementing the solutions, now I am the one designing and creating solutions for our clients all over the world.

What is your dream job?

Funny you ask. My dream job is to work at a deli shop or game stop. In my thinking, those jobs are less stressful but in all reality, it probably is not. This is probably some sort of retirement job. When my wife and I retire, our goal is to start a mobile petting zoo and get some goats, pig and chickens. We would offer the petting zoo free at kid’s birthday parties and events.

What do you do when you are not working?

I spend time with my wife, Jenna, and my one-year-old daughter, Sophie. I also enjoy spending time with our fur babies which consist of an English Bulldog, a Poma-Poh and a Shih-Tzu. They’re quite the odd wolf pack but we love them!