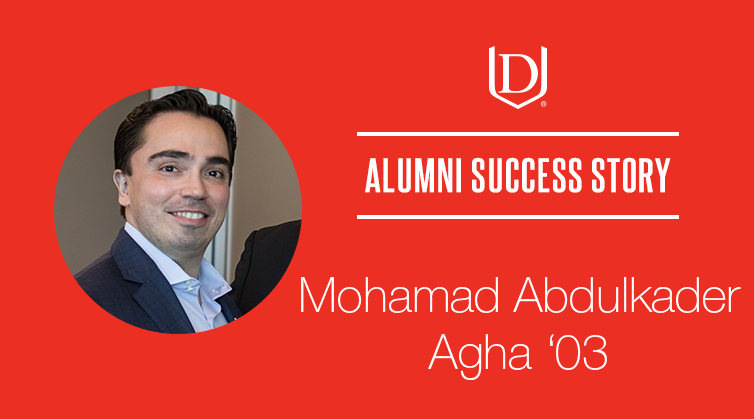 Chancellor Emeritus Donald W. Maine called it fate. Mohamad Abdulkader Agha ‘03 called it meant to be. Their serendipitous relationship is heartwarming. Learn more about Mohamad’s path to Davenport and his success as he lives and works in Dubai, leading the strategy team at the International Humanitarian City (IHC), part of the Mohammad Bin Rashid Global Initiatives foundation to improve 130 Million lives by 2025 through humanitarian and developmental work.

Nearly 6,000 miles from his home in Syria, Agha found a new place to call home in Grand Rapids in early 2001. His decision to come to America wasn’t easy. After losing his father at the age of 13 and his mother only nine years later, Agha found himself looking for guidance in his next step. Luckily, he has three older sisters who had his best interests in mind and encouraged him to gain a global perspective on life by pursuing his MBA in the United States.

His brother-in-law, who is a doctor in the Grand Rapids area, recommended that he check out Davenport because he heard that the class sizes were small and the professors used real-life experiences to teach the classes.

Agha started classes at Davenport in spring 2001 and in the summer he completed a graduate program at Georgetown University, then went back home to be with family. While he was home, the events that shook the world on September 11th occurred. Things were uncertain and he was unsure if he was going to return to Davenport.

“I got a phone call from Davenport,” said Agha. “The call was from my advisor.  She said, ‘Congrats, Mohamad! You have been awarded the international students’ scholarship this year. We look forward to your coming back to Davenport.’ And that call made me book my flight to come back.”

As his studies progressed, he continued to build relationships on campus. He got an invitation to speak at the international students’ luncheon because of his reputation for academic success and charismatic professionalism.

“I got up, I did my speech and after I was done, I was asked to join a table with the former president of Davenport University, Don Maine. I shook hands with him and we introduced ourselves to each other. I was sitting there, enjoying being next to the “big man on campus,” yet not really knowing who he was. Then, the former VP of Alumni & Development walked up and said, “Mohamad, that gentleman paid for your scholarship. Your scholarship is the Maine Family International Student Scholarship!”

From that moment, Agha and Maine clicked. Although there was a difference in age and experience, they became friends.

As Agha’s career flourished, so did their friendship. “We used to have lunches that lasted two to three hours to discuss global affairs at a restaurant in East Grand Rapids. At that point in my life, I didn’t have a father. So guidance was either spontaneous, by observing others, or by Don giving me the time and mentoring me step by step.”

Agha consulted and updated Maine about every chapter of his life. After earning his MBA from Davenport, Agha worked at Ernst & Young. Next he was recruited by the United Nations. At the age of 30, he was the youngest director hired at the UN to manage the Private Sector Development Program. He led the UN Global Compact as a representative and secretary general to its Advisory Council for five years.

In 2012, Agha left the Middle East. He took a job at the World Logistics Council as the director of strategic partnerships to lead a global team which coordinated with organizations from 56 countries involving the top technology, finance, insurance and semi-government organizations.

Now, Agha and his wife, Rim, and baby twins (Abdulkader & Ayla), live and work in Dubai. He leads the strategy team at the International Humanitarian City (IHC), part of the Mohammad Bin Rashid Global Initiatives foundation to improve 130 Million lives by 2025 through humanitarian and developmental work.

“Here is a person whose country has collapsed,” said Maine. “He built a brand new global career. There are a lot of people who could not do that. He now has mastered the culture of the UAE and risen to the point of being entrusted to serve its global initiatives. He left Damascus to work in Geneva and Kuala Lumpur and then made his way back to the Middle East.”

What makes Agha’s relationship with Davenport so special is the personal attention he was given by Maine and the professors. He left Davenport with high academic knowledge and the culminating experience of all of the individuals who shared their experiences and knowledge with him.

“I am thankful for Don Maine because he filled a void in my life. Yes, his scholarship has made a huge difference in my life, but money could be replaced. What isn’t replaceable is his experience and later on his friendship and love that keeps growing. Thank you, Don Maine!”