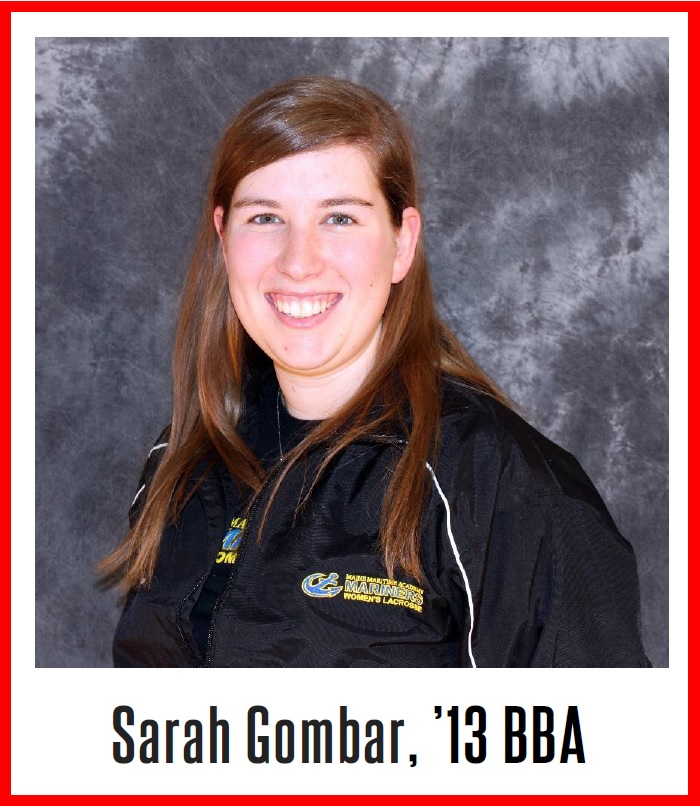 Even though Sarah Gombar, ‘13, is a natural born planner, she never could have planned to be the Head Women’s Lacrosse coach at Maine Maritime Academy! But, with the help of many DU mentors and friends, Sarah landed a dream job at the age of 22. “While I was researching jobs for a graduate school project, I ran across this job. It was very interesting, so I applied. Not in a million years, did I think I would get it. I am extremely grateful for the opportunity I’ve had to build this NCAA program from the ground up.”

Sarah, who is entering in her second year of coaching at Maine Maritime Academy was named the first ever Women’s Lacrosse Coach in 2014. Sarah coached two NAC All-Academic selections, a NAC Woman of the Year nominee, three IWLCA Academic Honor Roll members, and an IWLCA Academic Honor Squad.

Sarah, a Saginaw native, is not new to coaching and mentoring. Throughout college, Sarah was a Resident Assistant for two years and led the Hall Advisory Team. She also was the housing liaison for the summer camps and conferences. She enjoyed coaching the younger generation at Northview Middle School, Caledonia High School and Pure Advantage Lacrosse Club. While in graduate school at University of Mississippi she was the Women’s Lacrosse Club team coach, which participates in WCLA Division I.

“Davenport laid the foundation for my coaching success. I am able to use my BBA in Human Resources to better coach and influence positive culture on my team. I truly believe that DU gave me opportunities that I would have never received elsewhere. Between the people I met and experiences I had at DU, I am extremely grateful.”

When Sarah is not on the lacrosse field, she enjoys traveling back home, hanging out with friends and family, and playing hockey. Sarah is also pursuing her Higher Education master’s degree with a focus in College Student Personnel at the University of Mississippi and a master’s degree in International Logistics Management at Maine Maritime Academy.