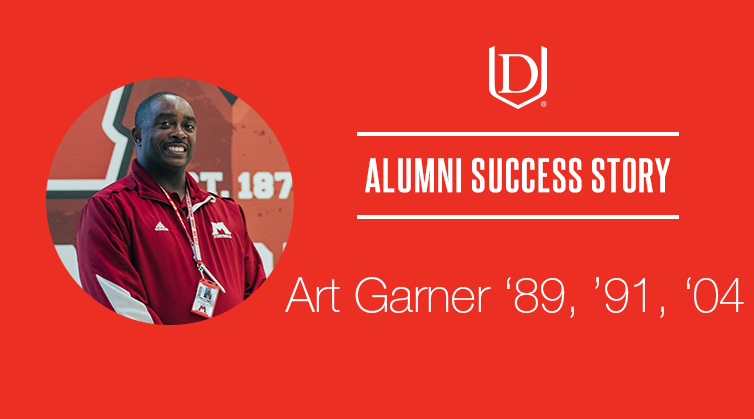 A Principal’s Message To Students

“If I could meet Instructor Soper today,” Art Garner smiled slowly, “I would probably cry,” as he recalled his favorite professor who inspired him to go into education.

Garner grew up near Ottawa Hills in Grand Rapids in the mid-70′s. Money was scarce for his parents, who had divorced when he was young and he had to help support the family.

Despite the challenges, Garner retained a unique flair and became well known for dressing in a suit, tie and pocket protector every day. His determination carried over into his school work and he excelled.

After high school, Garner attended Davenport College but struggled at first because he didn’t have money or a support system. Luckily, he found Instructor Soper who challenged him.

Garner’s ethics class with Instructor Soper challenged him to get out of his comfort zone. The instructor would ask the students about their childhoods, how they grew up, and what their neighborhoods were like – spurring conversations about culture, race and social economic issues.

“Some of the conversations were tough, yet eye opening. I almost dropped his class because I felt picked on for being unlike the other kids.” Garner remembers confronting Instructor Soper, asking why he frequently called on him, “I remember him saying to me, ‘Because you have something to say.’”

Instructor Soper showed Garner and the other students in his class that they each had a unique story, and that by speaking up they could learn from each other. Instructor Soper’s own path had shown him that he needed to do more with his life than just get a degree – he wanted to change people’s lives.

Instructor Soper’s wisdom shaped Garner’s perspective on life and helped him realize his own passion was in education.

Garner graduated from Davenport in 1989 with his associate’s degree in accounting and 1991 with his bachelor’s degree in accounting, mathematics and social sciences. He started his teaching career at Grand Rapids Public Schools as a math teacher. Then, worked at Davenport for a few years as a Grand Rapids Area Pre-College Engineering Program (GRAPCEP) coordinator. Next, Garner landed the assistant principal position at Grand Rapids Central High School. While working as a GRAPCEP coordinator, Garner earned his MBA from Davenport in strategic management in 2004.

Garner continued to pursue a higher degrees. He earned his Ed.D. in educational administration and supervision. His doctoral studies focused on the ways that professional development can improve professional learning communities, specifically for math teachers.  Garner worked his way up in the Grand Rapids Public School system, serving as a teacher, high school assistant principal, high school principal and middle school principal for almost 12 years.

Now he’s the principal at Muskegon High School and is proud to make a difference in the lives of students and teachers in the Muskegon area. As the “teacher of teachers,” Garner believes the principalship has changed. It is no longer a managerial model, it is an instructional leader model.

“The principalship has influence on the community as a group of learners. We are all in this together. We are making education a community focus.”

Muskegon is undergoing change right now with a positive energy and renewed focus. Garner believes that the children his community educates will continue the growth and guide the change in coming years.

Garner hopes that he can translate his story to students in Muskegon today adding, “It all comes down to my experience with Instructor Soper – wanting to quit and overcoming my challenges. My story is about growth.”