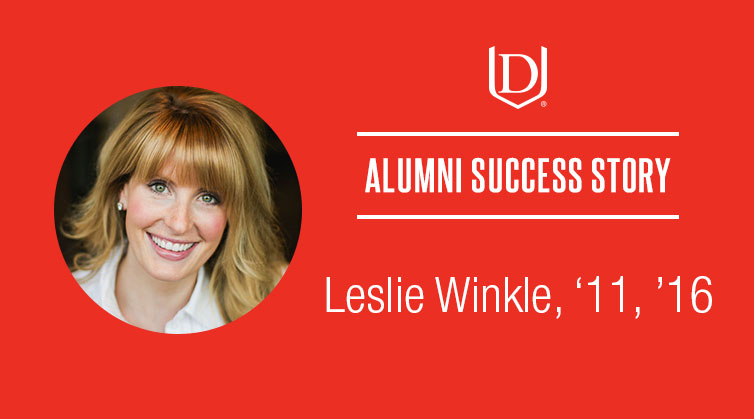 “Work hard and be nice,” is the motto that runs deep in alumna’s Leslie Winkle’s company, Studio 415 Salon. “That is what differentiates us. Our culture is our number one priority, and everyone is kind and inviting. We go the extra mile with little things.” Her hard work has paid off! Studio 415 was recently recognized by the Traverse City Chamber of Commerce as a recipient of the Small Business of the Year Award. Learn more about Leslie’s unique journey as a DU graduate and small business owner below.

Tell me about yourself, Leslie!

I was born and raised in Cadillac. I graduated high school early to begin my journey as a hairstylist. I then moved to Traverse City and worked in a salon while also pursuing a degree in business.  I graduated with my BBA in Financial Management in 2011 and my MBA with an Accounting Concentration in 2016 from DU. Currently I own Studio 415 Salon in Traverse City where I am able to combine both of my passions – business and the beauty industry.

How did you get into cosmetology?

As a young girl, I was always styling my hair and all of my friend’s hair.  Towards the end of high school I was really ready to move on to new challenges and so I decided to graduated high school early.  I moved to Lansing to start cosmetology school at Douglas J Aveda Institute. My dad, who is also a Davenport graduate, was not in favor of the idea of me not going to college, so he made me promise him that I would go to college after. Well, funny enough, it took me a few months after getting a job as a cosmetologist, that I realized my dad was right – I did need a degree.

So you took your dad’s advice?

Yes, I enrolled at Northwestern Michigan College in Traverse City and continued my studies at the Davenport University Traverse City campus. I don’t think I have ever made my dad happier than the day that I told him I was going to school.

How did you go from doing hair to earning your MBA and then owning your own salon?

I worked my way through undergrad doing hair. Once I finished my bachelor’s degree I still felt a little unsure of what I wanted to do. I remember thinking, I have this degree, but I love what I do, what do I do now? I wanted to put the degree to use, yet I had built up a very successful business behind the chair. I started my master’s three months after I finished my bachelor’s degree. I think it was buying me time – if I was still in school I could still do hair – was my thought.

I took an internship with the State of Michigan which the DU Traverse City Campus Director, Alyssa Irani, told me about. I was working at the internship, doing hair, and going to school. The internship led me to a different position and I stopped doing hair for two years. I worked for a couple of different businesses which were under one umbrella and owned by the same person. I was doing accounting for an oil & gas company and, at one point, I was the director of marketing for a tech company.  Looking back on these roles, I can see God’s plan at work.  I learned so much, and built many relationships that help me today.

While I was working for that company, I had dinner with my parents and remember saying, ‘Okay, I think I figured it out where my real passion is and I need to do something with it.’ My plan was to open a salon; however, the salon industry in Traverse City is so over saturated, so I couldn’t just count on people coming in – I had to be different.

As I was making plans to open a salon, I met an old salon co-worker who had opened her own salon – Studio 415.  I respected her and didn’t want to open a salon in the same town as an unwelcomed competitor.  We had an open and honest conversation about my desire, and as a new mother, she mentioned being open to selling her salon.  About a year later, after many conversations and negotiations, we finalized the deal! I have been the owner of Studio 415 since the fall of 2014.

We have a simple saying at Salon 415 – work hard and be nice. We even have a sign in the salon with our motto.  When I bought the business that was my main requirement and I think that it is what differentiates us. Our culture is our number one priority, everyone is kind and inviting and customers feel it. We go the extra mile with the little things, and we take a lot of pride in providing the best possible service, while also creating great experience for each guest.  It seems simple, but it is how we do business.

What do you do when you are not working?

I am a pretty active person and love spending time outside or with family and friends.  I also have two rescue dogs, who require quite a bit of time and attention