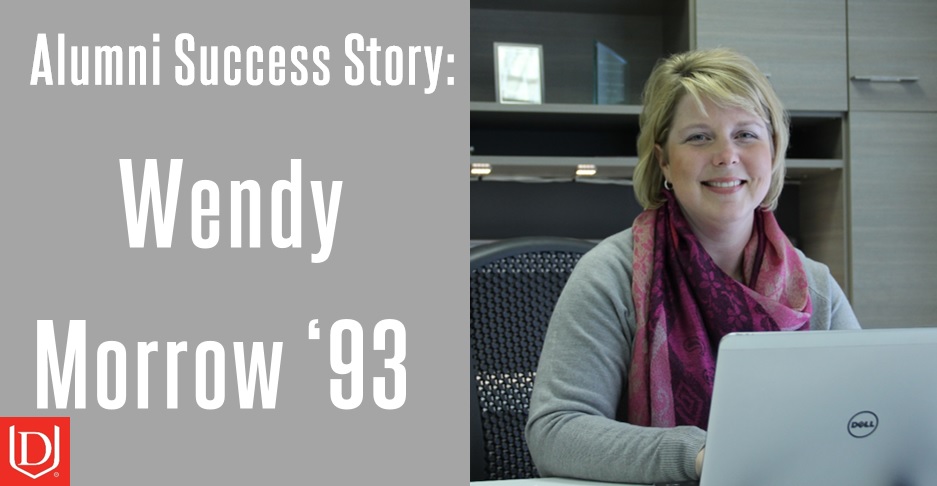 “As the first woman in the VP of Finance role at The Stow Company, I quickly realized that my hard work had paid off. I broke the mold of the “typical” VP which was so empowering.” Wendy Morrow ’93, credits Davenport University for helping her lay the foundation to rise to the pinnacle of her career. Read more about Wendy and her journey to the top on the alumni blog.

Breaking the Glass Ceiling with Groundwork from DU

Wendy Morrow describes herself as an “atypical” accountant who is unafraid to make bold moves. These moves have paid off with a rise to the pinnacle of her career, employees who appreciate her leadership, and fulfilling work.

As a teenager, she aspired to follow in her mother’s footsteps to become an accountant. She took the first step towards her dream by enrolling at Davenport in 1989.

Davenport’s “no nonsense” curriculum appealed to her and she liked that she could attend Davenport full-time while working part-time . A part-time office job in Grand Rapids introduced her to bookkeeping and opened her eyes to the possibilities of accounting.

“I like numbers and I enjoy taking disorganized facts and organizing them,” she says. “I also appreciated the opportunity to apply all the skills and knowledge I was learning in the classroom to my trade.”

Wendy earned her Bachelors of Business Administration in accounting, with specialties in mathematics, business management, and communications in 1993. Her first job after college was working as an accounting assistant for Nicholas Plastics Inc. Wendy worked her way up earning the accounting supervisor role a few years later.

In December 1999, the same year she married the love of her life, Matthew, Wendy became the accounting supervisor at The Stow Company, a manufacturing company offering a variety of organization solutions. Four months later, she was promoted to controller. She joined The Stow Company’s most senior leadership fourteen years later as the Vice President of Finance.

“In a room full of The Stow Company’s team members the CEO announced that I was being promoted to the new VP of Finance. It was such an amazing feeling. I was so honored and proud,” said Wendy. “ As the first woman in the VP of Finance role at The Stow Company, I quickly realized that my hard work had paid off. I broke the mold of the “typical” VP which was so empowering.”

Today , Wendy is the Chief Financial Officer at Grand Haven Custom Molding and says her career highlight is seeing her employees succeed. “I put my employees first by supporting their needs and career development, which ultimately helps our customers.”

“I also like to have fun at work, which is not typical of an accountant. At an annual company dinner, I led the management team in the Thriller dance. People still talk about it today. I like to be bold, doing what is expected of me, yet being unexpected.”

In her spare time, Wendy enjoys cross country skiing in the winter and being active in the summer outdoors.

Wendy added, “I am very proud to be a Davenport graduate. My education laid the foundation to get me where I am today.”