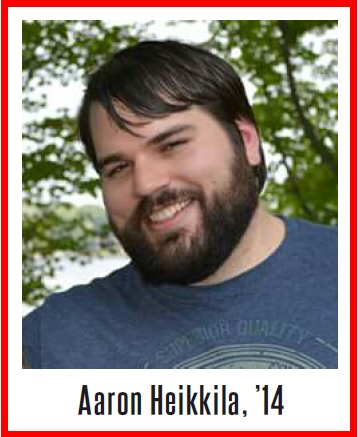 We are honored to feature Aaron Heikkila, ‘14, as our Alumni Success Story this week.  Aaron was recently recruited by Target to work at their world headquarters in Minnesota. He is a member of the Cyber Security Incident Response Team working as a Triage Analyst. His job is to investigate and analyze reports of Target’s security breaches, conduct analyses and respond.

Aaron is a first generation college student who grew up in Battle Creek. He attended Michigan Tech for two years, but didn’t find his niche. He joined the armed forces to serve in the United State Army for four years where he worked in an IT role. He was able to use those skills he learned in the army to get ahead at DU. Aaron was very focused on his studies while gaining a keen interest in networking security. “I liked to take computer viruses a part, see what they are and what they intended them to do,” stated Aaron. Through his new interest in network security, Aaron gained a mentor with one of his adjunct professors, Chris Payne ‘08 & ‘10, also a Davenport alumnus. Chris helped Aaron obtain internships and his first job at Spectrum Health, where Chris also worked.

Both Chris and Aaron were recruited by Target earlier this year to work on the same team. Chris is now Aaron’s supervisor. “My time at DU prepared me to work in the “major leagues” in the IT field. I was called up from the “minor leagues” as a member of a regional IT security team, to now being employed by one of the world’s leaders in IT security,” stated Aaron. “The best thing that happened to me while I was at DU was the connections and friendships I made, especially with Chris.”