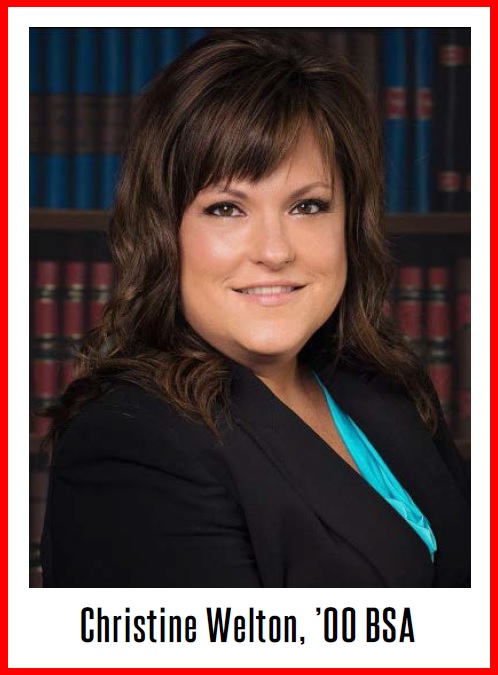 When Christine was asked if she had any advice for incoming DU students she said, “Don’t give up!” As a lifelong learner, Christine is an excellent example of not giving up!

Since the age of 11, Christine dreamed of going to law school. She started her education career at UofM after high school, but took some time off to pursue non-educational goals. She later returned to academia enrolling at Northwestern Michigan College where she worked toward a two-year legal assistance degree, but decided to aim higher ultimately earning her BAS in Business from Davenport in 2000. Christine was working in the legal profession and loved it, but couldn’t stay away from school. She completed her MA in Organizational Management at Spring Arbor University in 2009. In 2013, through her continued hard work, effort, and determination, she earned her Juris Doctor from Western Michigan University Thomas M. Cooley Law School, Magna Cum Laude.

Christine sites her time at DU’s Traverse City location as the turning point for her education career. “Davenport’s flexible class schedule, relevant degree programs, and proximity appealed to me.” But it was the encouragement from supportive and invested instructors that made a lasting impact, such that when she decided ten years later to make her dream of law school a reality, she knew she had the foundation and ability to succeed. “My education at Davenport helped me springboard into the career I had always wanted,” stated Christine.

Now, Christine is an Associate Attorney at Bolhouse, Baar & Hofstee, P. C. in Grandville, MI. Her practice focuses in the areas of Family Law, General Litigation, Real Estate, Employment Law, Collections/Creditors’ Rights and Civil Rights/Disability. She also has broad prior legal experience which has given her a solid, well-rounded skill set in many other practice areas including Probate Administration, Landlord/Tenant, Personal Injury, Mediation and Special Education/Individuals with Disabilities Education Act. As a cancer survivor, Christine enjoys volunteering her time at Gilda’s Club of Grand Rapids. She also enjoys spending time with her husband, two daughters and grandson, cook paleo, reading, and traveling.