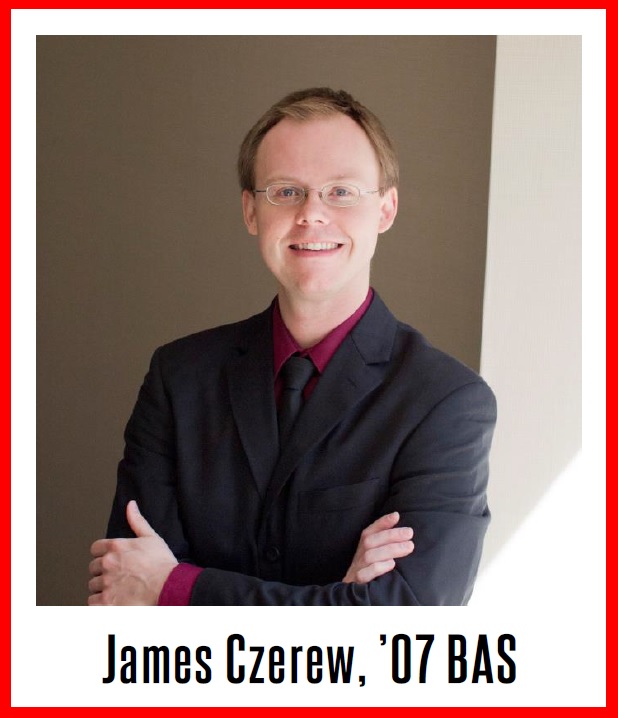 There’s more to ‘networking’ than just routing and switching!

We are proud to feature our next alumni success story spotlighting James Czerew. James is a man of many talents and passions. He is an entrepreneur, business owner, technology consultant, public speaker, as well as an active board member in many local technology, business, and nonprofit organizations. He launched TechConnect, LLC in July 2011 with the goal of developing technology systems & networks that are stable, secure, and elegant for both local and national companies. “The inclusion of business courses in my IT degree path gave me a strong business foundation and the courage to launch my own technology and security company,” stated James.

James credits his success as an entrepreneur to his applied experiences at DU. After he graduated from DU with dual Bachelor Degree Majors in Network Security and Network Engineering in 2007, he obtained a position as a Network/Security Engineer in the healthcare industry. “What I liked about Davenport University was the emphasis on practical hands-on learning and the access to advanced technology equipment and instructors who were experts in their fields.” Mentoring also became a passion of his while pursuing his degree. He was known by many of his former professors and classmates to have taken an active role in and out of the classroom as a leader helping other students.  After he graduated, he taught advanced Network Security & Wireless Security courses at DU for three years. James was able to help the students grow not only as technology professionals, but as professional leaders. He understands the value of relationship building and he is often quick to remind his technology students that “there’s more to ‘networking’ than just routing and switching!”

In his spare time, James enjoys volunteering and participating on nonprofit boards, including the Davenport University Alumni Association Board. He also currently serves on the aimWest Board as Vice-President, is the Director of Technology for the PAWM (Parkinson’s Association of West Michigan), was a co-founder and President of the WMCUG (West Michigan Cisco Users Group), was the President of the GR-ISSA (Information Systems Security Association), and also helps organize & judge an annual Collegiate Cyber Defense event.